Crimean Church of the Kyiv Patriarchate and its believers attackedCrimea and religious freedomUkraine’s faiths unite in response to Russian military aggressionUkrainian Greek-Catholic priest in Sevastopol abducted .. by police (update)Another activist disappears in CrimeaAbducted activist Andriy Shchekun removed for “subversive activities”More abductions in the Crimea (updated)Urgent Appeal from residents of the CrimeaRussian troops already deployed in mainland UkraineThe Crimea is our Home: Get your troops out!Crimean "referendum" a grotesque farceCrimean Tatars call on all Crimeans to boycott "referendum"Avoiding Ukraine’s language minefieldsChief Rabbi and others dismiss Putin’s “anti-Semitic extremist” claimsRussian propaganda must be challengedWestern Media: Don’t distort the situation in Ukraine!Russia’s aggression poses dangers beyond Ukraine’s bordersCrimea: Anti-Semitic card and other provocation in time of siegeMr Putin: We ethnic Russians and Russian speakers don’t need protectionDangerously orchestrated Crimean exercise
• Topics / Freedom of conscience and religion 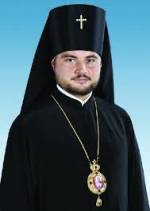 In a move which may indicate the growing divide between the Ukrainian Orthodox Church of the Moscow Patriarchate and the Russian Orthodox Church, one of the UOC MP’s leading clergy, Metropolitan of Pereslavsk-Khmelnytsky, Oleksandr [Drabynko] has condemned the attack by armed Russian Cossacks [and so-called ‘self-defence’ paramilitary] on June 1 in Perevalne, outside Simferopol.

On his facebook page, he writes that “the actions of those who burst into the church of the UOC KP and carried out an act of vandalism violate not only the laws of Ukraine on the territory of which this shocking incident took place, but also God’s eternal commandments. Therefore all those who took part in this shameful action are criminal both from the point of view of secular law, and from the point of view of Christian ethics and Church law”.

He “sincerely asks forgiveness for the crime committed by people who consider themselves to be representatives of the Moscow Patriarchate and ask them to show wisdom and refrain from mutual acts of violence with regard to the Ukrainian Orthodox Church”.