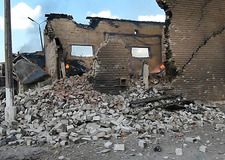 The image is from LifeNews.ru and has a caption underneath claimed that “The Ukrainian military have razed Semenivka to the ground”

The in Russia’s behaviour from Germany’s Foreign Minister, Frank-Walter Steinmeier suggest that neither he nor his staff are watching the Russian media.  There it’s business - misinformation - as usual.

The latest lies have been and concern the anti-terrorist operation in a large village Semenivka [Russian: Semyonovka] 20 kilometres south of Slovyansk.  The Russian channel LifeNews reports that Semenivka has been totally razed to the ground by the Ukrainian military.

During military conflict it is by no means easy to obtain accurate information with all sides generally unwilling to admit to losses, defeat etc.  Any deliberate focus only on one side’s version is suspect,   especially where the allegations made are serious. The presenter on Anna-News with the head of the information centre of the so-called ‘South-Eastern Front’, Konstantin Knyrik. No effort is made to indicate to the audience that Knyrik is an interested party whose information should be viewed in that light.  Quite the contrary, in fact -  the presenter at the end of his harrowing account concludes with the words: “I hope this nightmare ends soon”.

Any viewer, after five and a half minutes of this will agree that it’s a nightmare – genocide, no less.

Knyrik claims: “The village of Semenivka has been totally destroyed, not one building’s been left standing. You can say quite seriously that genocide of the civilian population is taking place – factories have been devastated; a car station destroyed; mobile communications are down. At checkpoints radicals tell women and children who are leaving the city, terrifying them: “Go back, we’re about to bomb you”.

The word genocide is repeated a few times.  The military are supposedly bombing strategic industrial plants in order to prevent people working.  ‘Evidence’ of such genocide is claimed to be provided by the lack of medicines in the village.

“Nobody imagined that the authorities would be capable of such atrocities”.

All of these horrors are recounted with the presenter not even pretending to add any balance or mention divergent reports.

Radio Svoboda, for example, decided to verify the information by phoning General Oleksandr Razmazin.  He denied the claims and said that the army is only  “destroying those who kill the civilian population”.

Other reports, for example, from the , talk only of attacks against militant sources of fire.

on the website of the so-called Information Group on Crimes against the Person and will probably be added, without any attempts at verification, to that body’s next ‘report’ on human rights violations in Ukraine. Their reports are similar to the ‘White Book’ issued by Russia’s Foreign Ministry and have little if anything in common with real monitoring.

None of the above is in any way exceptional.  A number of Russian channels, , for example, claim that the soldier who became faint and dropped his rifle during Petro Poroshenko’s inauguration ceremony on June 7 and his colleagues have been sent to the east to fight.  The report is dishonest and primitive, with such obviously manipulative elements as the suggestion reported that the incident was a bad sign, “civil war is raging in the country, and weapons are literally falling out of soldiers’ hands”.

Once again, the information is provided by an interested party, this time without any effort to warn the viewers who are told only that the website of the Kremlin-backed  militants is a ‘Ukrainian information agency’.

For a country at war, such coverage is probably quite normal.  If Russia is at war, however, then it is quite unclear where Steinmeier found his ‘noticeable changes’, and  even more unfathomable how both France and Germany can defend France’s sale of war ships to Russia.