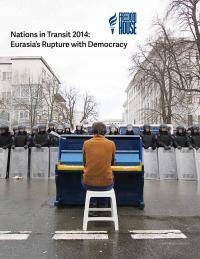 In its latest annual report, Freedom House has highlighted the negative role Russia is playing in Eurasia.

The report – Nations in Transit 2014 – asserts that “Russia served as the model and inspiration for policies that have led to an uninterrupted retreat from free institutions throughout Eurasia and in 2013 brought a new and alarming level of repression”.

As examples of this negative influence, it mentions the ‘replicas of Russian laws restricting ‘homosexual propaganda’ and foreign funding of NGO which appeared in several Eurasian countries.

These, unfortunately, included Ukraine under President Viktor Yanukovych. The package of repressive laws which Yanukovych had pushed through parliament on Jan 16 included the notorious requirement for NGOs receiving foreign grants to register as ‘foreign agents’ and other moves taken directly from Russian legislation [more details here].  There were also efforts to bring in the same laws against something called ‘promotion of homosexuality’.

In an introduction to the report, Sylvana Habdank-Kolaczkowska writes that the current crisis in Ukraine has focused the world’s attention on sharp divides between Europe and Eurasia.  In reality, however, “the fault line between these two regions has been deepening for many years, and Russia’s malign influence on the governance practices of its neighbours was rising long before the invasion of Crimea”.

“The Kremlin actively pursued a policy of intensified repression that dated to Vladimir Putin’s return to the presidency in 2012, using a series of new laws to per­secute LGBT people, harass independent civil society, expand state control over the media, and bring the internet to heel.”

This crackdown in Russia established a pattern for the surrounding region, where country after country in 2013 took up antidemocratic innovations that were pioneered by Moscow. In Kyrgyzstan, for example, a governing party proposed a virtual replica of Russia’s 2012 law requiring many civic groups to register as "foreign agents." A bill introduced in March of this year emulates Russia’s 2013 law against LGBT "propagan­da, " prescribing fines for anyone who spreads informa­tion about gay rights.

She points out that the repressive measures brought in under Yanukovych were revoked in mainland Ukraine, however Russian laws will now be implemented in the Crimea under Russian annexation.

Her summary to a report which has the Maidan pianist on its cover ends with mention of popular resistance in Ukraine.

“Events in Ukraine since November 2013 clearly demonstrate why civil society is the only Nations in Transit indicator that never declined during Yanu­kovych’s otherwise disastrous four years in power. By the beginning of 2013, Ukraine’s democracy score was already worse than before the Orange Revolution of 2004, and it declined further during the year due to deteriorations in media freedom and the ongoing and extremely rapid enrichment of Yanukovych’s close associates. But when Yanukovych abandoned a deal with the EU in favour of stronger ties with Russia, the country’s reservoir of civic engagement erupted into massive protests in Kyiv and other cities, with citizens demanding accountability and good governance from its corrupt authoritarian leadership.  Civil society also proved resilient in Kyrgyzstan.”

The report can be found here #.U5mC7PmSySp