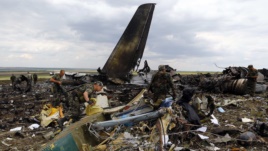 Kremlin-backed militants rummage for ammunition in the wreckage of the plane which was downed on June 14, killing 49 servicemen and crew

The EU has invited Russia to join talks on the EU-Ukraine trade agreement  This radical climbdown from previous refusals to engage in trilateral negotiations is reportedly called “significant” by EU officials who claim it reflects a “new climate” at the talks.  What kind of ‘climate’ the EU has in mind remains a mystery.  The invitation was announced one day after Russian tanks crossed into Ukraine at a border crossing by Kremlin-backed militants, and less than 24 hours before militants used advanced missiles to shoot down a military plane, killing 49 Ukrainian soldiers and the crew of the plane.

On June 14 EU President Herman Van Rompuy stated that there is “no doubt that the armed fighters that are terrorising and disrupting the lives of citizens in Ukraine are enjoying external support, including arms supply and reinforcement through foreign fighters.  As a neighbouring state, Russia bears a primary responsibility in ensuring that any such traffic and external support through its borders is immediately stopped, ".

Why such circumspect language when the many ‘foreign fighters’ have so far all been Russian nationals and the militants themselves openly acknowledge Russian ‘support’?

On May 2 when similar surface to air missiles were used to down helicopters, Sweden’s Foreign Minister Carl Bildt tweeted “Some elderly ladies bought some RPG’s or missiles at the local grocery store, I assume”.  Kyryl Savin from the Heinrich Böll Foundation’s Kyiv office points out that “these are advanced weapons that can’t simply be bought anywhere on the market, not even on the Russian black market. Every expert knows that. They should just stop with the lies and speak plainly: This is a war, and Russia is a party in this military conflict.

With respect to the military tanks, the US State Department stated clearly on June 13 that they “assess that separatists in eastern Ukraine have acquired heavy weapons and military equipment from Russia, including Russian tanks and multiple rocket launchers”.

On Saturday, NATO even provided images backing the conclusion that the tanks and armoured vehicles are Russian.  “The tanks do not bear markings or camouflage paint like those used by the Ukrainian military.  In fact, they do not have markings at all, which is reminiscent of tactics used by Russian elements that were involved in destabilising Crimea”.

These images raise significant questions concerning Russia’s role in facilitating instability in eastern Ukraine and its involvement in the movement of military equipment from Russian territory into Ukraine.   If these latest reports are confirmed, this would mark a grave escalation of the crisis in eastern Ukraine in violation of Russia’s Geneva commitments”.

The message is blunt albeit with a slightly perplexing opt-out clause.  How are these ‘reports’ to be confirmed if the images and expert assessments are not enough?

It was a month after Russia’s invasion of the Crimea before Russian President Vladimir Putin finally admitted the use of Russian troops in the Crimea. He is continuing to deny them against all evidence in eastern Ukraine.

Shortly after Putin announced Russia’s effective annexation of the Crimea, western countries were weak on sanctions, but apparently strong on commitment.  On March 21 both the EU and US added candidates for individual sanctions; cancelled the EU-Russia summit in June and promised that “any steps by Russia to destabilize Ukraine will have far-reaching consequences on relations in a broad range of economic areas”.

All threats since then of serious consequences “if” Russia destabilized Ukraine have remained bafflingly in the future tense despite ample evidence that Russia is waging an undeclared war against its neighbour now. The message has certainly been clear and consistently understood as such by Moscow who is scarcely even trying to concern Russian involvement.

Back on March 21 the European Council indicated that the EU would sign the political elements of the EU-Ukraine Association Agreement and that it was committed to signing the remainder.

The EU has now reversed its position on three-way talks and is prepared to treat Russia as an interested party to the agreement.  What this means in real terms can only be guessed.  As Barroso put it, “I want to reiterate our willingness, as European Union, to pursue talks with Russia, to discuss the concrete implementation of these agreements, in case there are any concerns on the Russian side”.

“So our message, as European Union, is a message of dialogue and cooperation, not a message of confrontation. At the same time we have to be firm in the respect of the sovereign right of any country to decide its own future.”

Over the last three months, Russia has actively fuelled bloody confrontation in eastern and southern regions of Ukraine.  The EU has threatened far-reaching consequences, but come up with next to none.  If it is now to treat Russia as a stakeholder in Ukraine’s affairs and confine itself to calls for dialogue, the consequences for European security and EU credibility will be devastating.