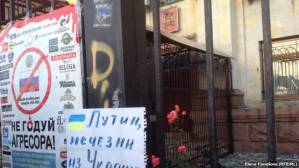 Don’t feed the aggressor!  Putin, get out of Ukraine!  Some of the demonstrators outside the Russian embassy on Saturday evening smashed cars, threw eggs, etc at the building

On February 20, 2014, after a day which saw dozens of unarmed protesters gunned down in Kyiv by police snipers, the EU finally announced sanctions against the regime of Ukraine’s President Viktor Yanukovych.  Roughly four hours later, Ukraine’s parliament voted in favour of a resolution to stop the so-called anti-terrorist operation announced on Feb 19.  The latter effectively enabled Yanukovych to impose a state of emergency in the country with the measures including sweeping powers for the Security Service [SBU] and law enforcement bodies.  By the following morning Yanukovych had signed a deal with the opposition.

One cannot prove that it was the sanctions, not directly the bloodshed which prompted 11 MPs to deal a blow to the government’s hitherto unbreakable majority and vote with the opposition.  Nor can we say with absolute certainty that the analyst who predicted that more bloodshed was needed to force the EU to take more decisive action was right.

On the other hand, the above-mentioned events marked the end of the killing until after Russia’s invasion of the Crimea on Feb 27.

On June 15, Valery Bolotov, leader of the Kremlin-backed self-proclaimed Luhansk People’s Republic admitted that they were responsible for shooting down a plane carrying 40 servicemen and crew.  49 men were killed in the attack which used sophisticated missiles that were neither bought on the Internet nor found lying about in the SBU buildings seized by militants.

Bolotov’s announcement flew in the face of attempts by the Russian RIA Novosti news agency to suggest that Ukrainian forces had brought down the plane.

The deaths prompted a huge crowd to protest outside the Russian embassy in Kyiv.  Unacceptable methods were unquestionably used during the protest and these in turn prompted Moscow’s unsuccessful attempt to get the supposed ‘pogrom’ condemned by the UN Security Council.

Moscow has not condemned the shooting down of the Ukrainian plane.  Russia’s Foreign Minister Sergei Lavrov did however see fit to phone his German counterpart Franz-Walter Steinmeier and the French Foreign Minister  Laurent Fabius complaining about the protest and blocking of a motion to have it condemned by the Security Council.  According to the Foreign Ministry reports, there was a three-way discussion between Russian President Vladimir Putin, Germany’s Chancellor Angela Merkel and France’s President Francois Hollande on Saturday regarding the gas talks between Russia, Ukraine and the EU, and “the situation around the planned signing of the EU-Ukraine Association Agreement”.

France is presently insisting on selling Russia two warships, while Germany has so far obstructed imposition of further sanctions against Moscow.  In this context, and given the undeclared war which Russia is waging against Ukraine, it seems at least unfortunate that talks about the Association Agreement should have taken place without Ukraine’s involvement. Given that the agreement is between the entire EU and Ukraine, information about the content of such talks would be desirable.

Western media report only that this call was made to urge Russia to back a ceasefire in Ukraine.  European countries have finally begun issuing statements both about the downing of the military plane, and about what Britain’s Foreign Minister, William Hague called the "completely unacceptable" sight of tanks entering eastern Ukraine from Russia.  He stated: "the Russian leadership should be clear that the international community stands ready to impose further sanctions if Moscow continues to provoke instability and does nothing to stop further violence."

This was the same message from the G7 meeting on June 5.  The number of such warnings of the EU’s readiness to impose further sanctions if Russia continues to destabilize the situation in Ukraine can easily be checked on Google.  It is frighteningly unclear what will finally generate a response, and not warnings of a potential response.

The carnage on Feb 20 was a point of no return for Ukraine.  EU and US failure to act now will lead Moscow to conclude that there is no such critical point – and no stopping it.