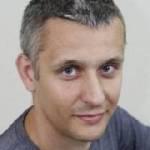 that the prosecutor has named a person suspected of the murder of its journalist Viacheslav Veremiy on Feb 19 this year.  The suspect is 45-year-old Dzalal Aliev, nicknamed Dima Dagestanets, who is asserted to have been in charge of ‘looking after’ a wholesale market for a local criminal authority who also happens to be a Party of the Regions MP.

It is probably worth noting, given the seriousness of the allegation, that in April this year, Tetyana Chornovol, the prominent journalist speaking as government representative on anti-corruption policy, publicly accused the MP, Yury Ivanyushchenko [also known as Yura Yenakievsky] of financing the pro-Russian militants.

Vesti.ua quotes the Prosecutor General’s Office of asserting that Aliev works for an MP from the Party of the Regions. They say that they have evidence that a certain Party of the Regions MP financed criminal gangs and was in charge of their activities. He had an assistant (on the wanted list since May 5), Sarkisian, who financed the activities of ‘titushki’ [hired thugs]. The Prosecutor General’s Office says that Agiev was under Sarkisian, and they accuse him of having carried out the killing.

People at the market say that Agiev has not been seen since December 2013.

Prosecution wants life sentences for the murderer of 33-year-old Viacheslav Veremiy. As reported, the journalist was returning by taxi together with Alexei Lymarenko, an IT specialist from the newspaper, later on Tuesday Feb 18.  When the car stopped at traffic lights in the centre, some masked titushki with batons and weapons began shaking the car and hurling Molotov cocktails into it.  The men were dragged out, beaten and Veremiy shot in the chest.