The Peace that chokes Russia 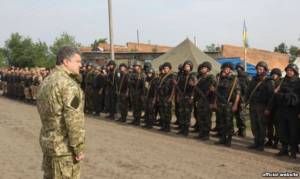 Forget NATO confirmation that Russian troops are amassing on the border and mounting evidence of Russian fighters and equipment being brought into Ukraine.  The news in Russia is that Ukrainian military have fired into Russian territory.  Russia’s Foreign Ministry asserts that the border checkpoint at Novoshakhtynsk was subjected to artillery fire from Ukrainian military and that a customs official was seriously injured.  State-owned RIA Novosti may have felt this was not enough and added a report from the Kremlin-backed militants asserting that six Ukrainian tanks had entered Russian territory.  By accident and for a moment, it would seem, unlike the tanks and trucks with armed fighters being brought into Ukraine.  Neither the Kremlin nor the Russian media mention that the exchange of gunfire took place because the checkpoint on the Ukrainian side is under the control of the militants and Russian President Vladimir Putin’s order on June 7 for border security to be heightened was for the benefit of western leaders wishing to avert sanctions and has proven entirely meaningless.

As of Friday evening the USA has responded to Russian military build-up on the border and overt escalation of the conflict by imposing sanctions against 7 Kremlin-backed ’separatists’.  This devastating blow has yet to be equalled by the EU.

Let’s hope western governments are following the Russian media since the mounted offensive seen on all government-controlled channels suggest that the last thing the Kremlin has on its mind is peace.  The Foreign Ministry has demanded that Kyiv negotiate with “those who really control the situation in the south-east of the country”, with this interesting formulation ostensibly referring to the militants.  The latter were immediately reported as having rejected the peace plan and said that they would use the ceasefire to ‘regroup’.

Those statements ran parallel to Russian media reports about the ‘attack’ on the Russian border crossing with LifeNews providing lavish details about heroic border guards shielding 200 refugees on Russian territory and claims that President Petro Poroshenko’s peace plan, like other promises, was coming to nothing.  The ceasefire was still hours away however that the viewers had no way of knowing.

The reports also came on the same day as entirely unsubstantiated claims that 10 thousand Ukrainians from Donbas are fleeing into Russia each day.

Both the alleged border crossing incident and the reports of refugees suggest that Moscow is seeking a pretext for openly bringing troops into Ukraine, or for at least torpedoing the peace initiative.

Western response, both in the targeting of 7 militants only and the latest statements of deep concern from the EU and OSCE Media spokesperson Dunja Mijatović seems to be widely off the mark.  Here, once again, they would do well to heed Russian commentators, albeit ones who have no chance of being heard on Kremlin-controlled media sources.  Russian journalist and music critic Artemy Troitsky recently called the management of the main Russian TV channels ‘murderers’ specifically because of the propaganda spewed out on their channels.  Even if mercenaries are in the majority, there are still a fair number of men being conned by the lies on Russian TV into going to fight – and die – in Ukraine.  In her appeal to the militants, Russian politician and former Soviet dissident Valeria Novodvorskaya urges the militants to stop and ask themselves what kind of fate awaits them, and why they want to be pawns in this game, sacrificing their own lives.  “We can’t understand who you are planning to die for. Surely not for Russian television that you’ve been glutted on?”.  The leading militants, she warns them, will be alright, they’ll scarper to Moscow, unlike the fighters who’ll die and not even gain a mention. The Kremlin doesn’t want Donbas.  On the contrary, they need it as a border so that they can get arms in to Ukraine, so that they can attack and ensure that Ukraine doesn’t have a single peaceful day, that reforms fail.

Such messages have been hounded out of the Russian mainstream media, and a number of the Internet sites, like www.grani.ru that regularly publish texts critical of the Kremlin cannot be accessed within Russia.  After the concentrated onslaught of lies and warmongering over many months, or longer, it is unlikely in any case that they will be heard, still less, headed by those whom Troitsky calls the ‘victims of propaganda’.

There is no excuse for them not being heeded by western governments.  The latter should finally act while they still have a chance of influencing the situation, or call a moratorium on statements of deep concern.   There’ll be plenty of cause later for real concern.