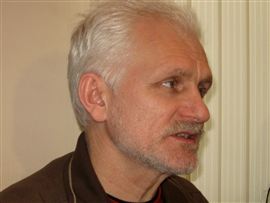 Ales Bialiatski, renowned Belorussian human rights defender, has been released.  He arrived back in Minsk on Saturday afternoon from Bobryisk where he was serving a sentence condemned throughout the world as politically motivated.   He had rung his wife, Natalya Pinchuk to say that he was free, and explains in the video below that he himself  only learned that he was to be released under an amnesty law this morning.

The Head of the Viasna Human Rights Centre and Vice-Director of the International Federation for Human Rights was arrested almost 3 years ago, on August 4 2011.  He was subsequently sentenced to four and a half years imprisonment for supposed tax evasion.  The charges were over accounts opened and used to transfer money from abroad to Belarus to help victims of political repression, since Viasna was officially dissolved by the Belarusian regime in 2003.

There was outrage and consternation when it was discovered that both the Lithuanian Justice Ministry and the Polish Prosecutor General’s Office had given information about accounts to the Belarusian authorities.

The case was widely viewed as an attempt to crush a prominent human rights defender and all those who stand up for democracy, rights and the rule of law in Belarus.

Information about the release from Charter 97