What should they talk about, Mr Putin? 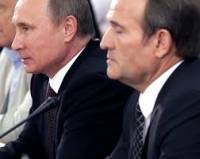 Vladimir Putin’s insistence on ‘negotiations’ with Kremlin-backed militants had appeared merely a ploy for stymying the peace process.  Who there was to talk to seemed as unclear as what they had to say. This may have changed with the ‘negotiator’ proposed suggesting a Kremlin-dictated agenda

Over the last two days Russian President Vladimir Putin has expressed ‘support’ for President Petro Poroshenko’s peace plan, while claiming that it must include practical action on “beginning the negotiation process”.  On Sunday, he of ‘support’ while clearly suggesting that the Ukrainian authorities were violating their own ceasefire.  He made no mention of the lack of any willingness by the Kremlin-backed militants to join the ceasefire, to stop taking hostages, etc. Nor did he call on them to do so.

from Ukraine’s Foreign and Defence Ministry for Russia to support the peace plan in deed, not just words, was echoed on Sunday in from Ukraine’s first three presidents Leonid Kravchuk, Leonid Kuchma and Viktor Yushchenko.   They write that: “in the eyes of the whole planet Russia is turning into a country that you need to defend yourself against and whom it’s impossible to believe.   The death toll from this carnage is approaching one thousand. Of course that is nothing compared with the hundreds of thousands of victims of the war in Chechnya which you waged against those same separatists, without any consideration for loss in the name of Russian [territorial] integrity. However then it was an internal matter of your country. Now you have decided to transfer these methods and approaches turned on their heads to our land.”

Since Putin’s words appear at first glance to simply echo the calls from the EU for ‘constructive negotiations’ and ‘political compromise’, it is worth considering his provisos in detail.   The peace plan, he says, “should not take the form of an ultimatum to insurgents.  The opportunity presented by the cessation of hostilities should be used to start constructive negotiation and to reach a political compromise between the parties in conflict in eastern Ukraine”.

Even if we close our eyes to the overt support which Moscow is giving the militants, it remains unclear which of the ‘insurgents’ Putin is seriously suggesting should take part in this ‘negotiation process’.  It is also anything but clear what they can find to talk about.

The militants stated immediately that they would not lay down arms and that they would use any ceasefire for regrouping.  Judging by the advertisement on the Russian state-owned RIA Novosti, they are also using the time to advertise for mercenaries with skill in driving tanks, etc. No government in the world, least of all Russia, would agree to negotiate with militants who have spent the first two days of the government’s unilaterally declared ceasefire not only fighting the military, but also carrying out reprisals against civilians who tried to get them out of their township.

Is it the leadership of the self-proclaimed Donetsk People’s Republic that Putin wants at the negotiating table?  Perhaps the self-styled defence minister Igor Girkin, who goes by the nom de guerre Strelkov.  by US officials as working for Russia’s GRU military intelligence service, “undermining stability as part of a major Russian covert action program in Ukraine”.

Perhaps if Girkin’s busy on the fighting side, they can talk with the ‘prime minister’ Alexander Borodai who also happens to be from Russia and only appeared on the scene in Donetsk in the middle of May.  He is known for his links in Moscow to extreme nationalist figures like Alexander Prokhanov.

There are of course some members of the ‘DPR’ from Ukraine.  Pavel Gubarev has been prominent from the outset.  His links with the neo-Nazi Russian National Unity party have not prevented him and his comrades from parroting Kremlin rhetoric by presenting the militants as fighting ‘fascism’.

There’s Denis Pushilin, another DPR leader, but here the next problem arises: what there is to discuss.  Presumably Putin would condemn insistence that the many hundreds of civilian held hostage be freed immediately as another unacceptable ultimatum, and not ‘constructive’. Pushilin’s statement a day after the May 11 pseudo-referendum that the DPR would be asking to join Russia was watered down in line with Russia’s public statements.  DPR leaders have still continued to call for Russian military intervention, and insist that Ukraine is a foreign state to them but the suggestion that they could have a position independent of the Kremlin seems absurd.  The DPR’s so-called ‘constitution’ makes it quite clear that if they did come to power, many of Ukraine’s constitutional freedoms would be discarded.  These include religious freedom since the DPR recognizes only the Orthodox Church of the Moscow Patriarchate. These are not abstract considerations for the future. Where the militants have seized control, they have terrorized and on many occasions abducted those holding any views they deem suspect, believers of others faiths, journalists, students and any who refuse to accept their rule.

It seems likely, however, that the DPR will increasingly be a front for what it is that the Kremlin is seeking to achieve in Ukraine.  One of Moscow’s stated ‘demands’ from the outset has been federalization, and on the Russian President’s website late Sunday evening suggests that plans to push for this are now taking entirely tangible form.

The report states that Putin “welcomes information about the beginning of preliminary contact with the leader of the civic movement ‘Ukrainian Choice’, Viktor Medvedchuk in Donetsk and Luhansk”.  Medvedchuk is described as consistently supporting the idea of Ukrainian federalization and it is asserted that he “is respected in Kyiv” and known in the West.

“In the course of negotiations with members of the Donetsk People’s Republic, V. Medvedchuk received their consent to a meeting with the OSCE mission on establishing dialogue between Kyiv and the south-east of Ukraine. Russia’s President has repeatedly stated that regulation of the crisis in Ukraine is only possible through peaceful dialogue and taking the interests of the eastern regions of the country into account.

Russia’s repeated calls for Ukraine’s federalization have been widely recognized as an ill-concealed attempt to weaken Ukraine as a state, and to establish firm control over its eastern regions.  Medvedchuk is generally believed to have acted as Putin’s representative in Ukraine and played an important role in ex-President Viktor Yanukovych’s rejection of the EU-Ukraine Association Agreement.  His ‘Ukrainian Choice’ party is known for such manipulative advertising opuses as a placard on the metro suggesting that European integration spells single-sex marriages.

Medvedchuk was in Moscow with Putin on Nov 22 last year at the very beginning of EuroMaidan.  rejection of the association agreement claiming that the country was on the brink of an abyss and could “fall into total dependence, colonial dependence, on the EU’s economy.”.  He was convinced that they would cope with EU and opposition “hysteria” “because sober calculation, objective data and what lies at the basis of our countries – Orthodox-Slavonic values, a shared vector of economic, domestic interests, a shared mentality – all of this played a part and all of this won”.

Three months later, EuroMaidan proved Medvedchuk, Yanukovych and Putin wrong with a terrible price paid for that victory.  Medvedchuk’s very role in any negotiations would be profoundly offensive to very many Ukrainians.  So too is the proposed discussion of federalization and spurious claim that this is in eastern regions’ interests.  At his inauguration speech after an unprecedented victory at the first post, President Poroshenko stated clearly that Ukraine’s unitary structure was not up for negotiation.  Moscow must not be allowed to use the violence and suffering imposed by Kremlin-backed militants, economic pressure and western reluctance to impose  tough sanctions to foist its agenda on ‘negotiations’.

Suspicion is already rife that Russia has played a role in the current scandal in Poland likely to bring down a government that consistently called for a strong position against Russian aggression. Whether or not those suspicions prove justified, Moscow’s tactics in Ukraine should leave no illusions regarding any European country’s security if  is not stopped.