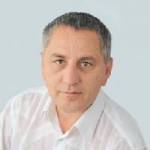 Viktor Danchenko, lawyer, head of an NGO defending drivers’ rights and editor of the newspaper Autojurist, was abducted by armed men on June 20.  The office of the NGO was smashed up; furniture broken and office equipment stolen.

Danchenko was thankfully released the following day but does not wish to speak about the reasons for the abduction and the armed militants accusations, fearing that this could be dangerous for him and for staff of his law firm.   He told Telekritika that he is safe now, and is trying to restart work in his offices after the militants destroyed them.