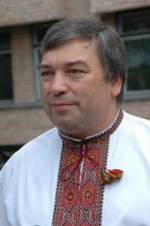 Volodymyr Semystyaha, head of the local branch of the Prosvita Society has been abducted by Kremlin-backed militants and is believed to be in the basement of the SBU building in Luhansk,

The militants burst into the Ukrainian Canadian Renaissance Centre which Semystyaha is the head of, searched the offices, removing the centre’s documents and taking Semytyaha away.

There has been no contact with Semytyaha since then and there is no indication as to whether the militants have issued any demands.

Informator.lg.ua mentions the abduction of Alexander Reshetnyak on June 10.  As reported, Reshetnyak, a Luhansk EuroMaidan activist was brought to hospital two days later  with multiple life-threatening injuries, including a bullet wound.  His friend Vsevolod Filimonenko says that the so-called Luhansk People’s Republic miilitants tortured Reshetnyak hoping to obtain information about places where the Ukrainian army and battalion Aidar were deployed. The militants didn’t achieve anything, they just shot him in the back.