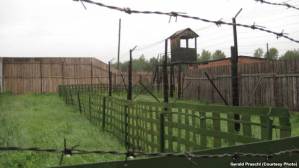 The pressure ratcheted up slowly on Perm-36, the renowned Gulag museum chronicling Soviet repressions on the site of a preserved Stalin-era camp: First its state funding was cut, then its water and electricity.

A year after its troubles began, the museum has seen its director sacked by regional authorities and been forced to halt tours amid what many see as a coordinated campaign to undermine one of Russia’s leading institutions educating the public about victims of the Soviet regime.

The museum’s existence was “confirmation that federal and regional authorities had learned the lessons of the past and were ready to do everything to stop a repeat of the 20th century national tragedy, ” Robert Latypov, regional chairman of the respected rights organization Memorial, wrote in an open letterto Perm Governor Viktor Basargin.

“The recent events are forcing us to doubt this, ” added Latypov, who is now leading a drive in the region to raise awareness for the plight of the Gulag museum.

The letter has garnered more than 47, 000 signatures since Latypov registered it as an online petition earlier this month and is to be sent to Basargin once it hits 50, 000 signatures.

The pressure on the museum comes at a time of a creeping rehabilitation of the Soviet era in Russia as well as rising imperialist sentiment following the Kremlin’s annexation of Crimea in March.

Earlier this year, the Communist Party posted a petition on its website accusing the museum of “propagandizing fascism.” The petition collected only several thousand signatures, but the charge was parroted this year by a Perm regional lawmaker who accused the museum of working to undermine the Russian state and demanded its financing be cut.

The museum’s troubles went federal this month when the fiercely pro-Kremlin network NTV aired a television segment titled “Fifth Column”that denounced many of the Soviet dissidents who were held in the camp -- and later rehabilitated by Russia -- as "fascists" or adherents of Stepan Bandera, a 20th century Ukrainian nationalist regularly vilified in Russia during the Ukraine crisis.

The museum was forced to abandon its calling-card international forumafter regional officials made tweaks to its funding last year. This year, financing dried up altogether after the regional government scrapped an agreement with the museum.

By April, the museum was forced to stop working altogether after having its electricity and water cut off, followed by the regional culture ministry’s decision to fire the museum’s director in May.

“We believe that activity at the museum is being systematically constricted, ” Latypov told RFE/RL by telephone.

Perm-36 was built in 1943 under Joseph Stalin as a Gulag labor camp. It continued to serve as a penal colony after his death, and in the 1970s and 1980s it was one of the country’s harshest facilities for political dissidents. Sergei Kovalyov, a veteran Russian rights activist, was incarcerated in Perm-36 as a Soviet dissident.

After the collapse of the Soviet Union, activists salvaged the remains of the camp, transforming it into a unique museum that served as a vibrant and symbolic platform for international forums as well as the only originally preserved labor camp in Russia.

Now nearly two decades old, the Perm-36 museum is known as the site of the Pilorama international forum that assembles historians and thinkers from across the world to discuss modern and historical Russia. The forum stopped last year.

Latypov speculates that the museum is coming under pressure primarily because authorities see the museum either as an “opposition” structure or a “potential” platform for the opposition, and secondly because it is not controlled by the state.

He said he does not expect the authorities to close down the museum altogether, a move he said would deal a "reputational blow" to both local and federal authorities.

“They probably won’t close it, ” Latypov said. “But they could -- if they wish -- transform it into a completely ordinary little provincial museum.”