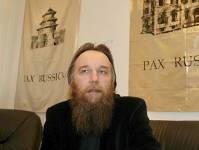 What had seemed like the good news that Russian ultranationalist Eurasian ideologue Alexander Dugin had been removed from his post as a faculty head within Moscow State University’s Sociology Department has now turned into intrigue.  On June 28 he was still giving an interview to LifeNews about his dismissal, while some media were reporting MGU as denying that he had been removed.

The news came from Dugin writing on his facebook page about a meeting with the rector, V. Sadovnichy which he could hardly have misunderstood.  If he didn’t make it up for sensation purposes, then it is not clear who was behind the dismissal which was allegedly because “in certain circles” there was dissatisfaction over his stand on Ukraine and support for the Kremlin-backed militants of the self-proclaimed Donetsk and Luhansk People’s Republics. It is no clearer why the decision was revoked.  Only the malignant influence of Dugin’s so-called ‘Eurasian ideology’ on Russia’s invasion of the Crimea and on events in eastern Ukraine is beyond any doubt

Dugin’s Eurasian vision is imperialist, anti-Western and firmly against democracy.  Russia, so the line goes, should fulfil its historical role as a great empire by joining with former Soviet neighbours in a Eurasian Union. If Dugin’s increasing influence among those close to the reins of power in Russia remained largely a subject of academic discussion up till February this year, that changed dramatically with Russia’s invasion and annexation of the Crimea.

On Feb 27, the very day that armed soldiers without insignia seized government buildings in the Crimea, Anton Shekhovtsov, specialist on far-right movements,  wrote the following:

“The newly acquired independence of the democratic Ukrainian state is now under attack from the most imperialistic and war-mongering circles in Russia who are backing pro-Russian ultranationalists in the Crimea and are forming Russian terrorist troops for subversive operations in Ukraine”.

In June as huge numbers of Russian nationals are fighting in Donbas, using military technology and arms coming from across that same border, the words are bitterly poignant.  They were not necessarily prophetic since Shekhovtsov,  Andreas Umland  and others monitoring such movements in Russia and Ukraine had long  warned of the danger Dugin’s fascist ideology and its growing influence in high places was presenting.

Although Shekhovtsov points out that Dugin considers Russian President Vladimir Putin too ‘liberal’, the latter’s arguments for the ‘return’ of the Crimea to the Russian have a Eurasian ideological tinge to them.

The link between Dugin’s ideology and those calling the shots in Moscow is seen particularly in the pivotal importance Ukraine holds.  A Eurasian empire is meaningless without Ukraine for historical, religious and geographical reasons.  Certain comical ‘readjustments’ have been attempted, such as Russian Wikipedia’s abandonment of the internationally accepted term Kyivan Rus, and talk instead of ‘Old-Russian state’.  In parallel, however, Moscow is doing everything to hold on to influence in Ukraine.

Dugin’s influence and active help provided to leaders of the so-called Donetsk People’s Republic has received attention beyond Ukraine.  He himself has forged links with far-right parties in Europe.  Whether this was on the Kremlin’s instructions, is not clear, but the aim of such rapprochement seems remarkably similar.  In a recent interview, Dugin mentions French National Front leader Marine le Pen’s words about the EuroMaidan “scum” being dangerous to let into Europe, then expresses confidence that the new European Parliament with its substantially increased number of far-right MEPs will “once and for all block Ukraine’s entry to Europe”.   He calls Ukraine a “freak state”, saying that it has collapsed and no longer exists.

There is, however, a future for ‘Novorossiya’, the term used by the militants in Donbas and other prominent pro-Russian figures like MP Oleg Tsaryov.

“Novorossiya is the salvation from the horror of Ukrainian collapse, it is the new future of great Russia. The entire Russian people are looking with hope to Novorossya. As they looked to the Crimea …”

During the interview, he presents himself and his followers in Ukraine as being somewhat in opposition to the Kremlin which, for example, advised the militants to not hold the May 11 pseudo-referendum.  On the other hand, “Russia will be obliged to help.  Putin, according to his rendition, did not originally plan to annex the Crimea but was forced to do so by “those who carried out a coup in Kyiv and the Crimeans who said that they wanted to be in Russia.  The same will happen with Novorossiya”.

‘Philosopher’ Dugin may well have got that wrong.  There have already been signs that the motley bunch of pro-Russian activists like Pavel Gubarev and sundry other marginalized figures who’ve used the stockpiles of arms provided to engage in racketeering and pillaging could be discarded as redundant.  This was seen when the Russian Vostok battalion ‘cleaned out’ the Donetsk administrative buildings on May 29.

Putin has seemingly convinced the OSCE mission and German Chancellor Angela Merkel of the need for his friend, Viktor Medvedchuk to  take part in peace ‘negotiations’, supposedly with the support of the Donetsk and Luhansk People’s Republics.   The suspicion seems not unfounded that Medvedchuk’s appearance indicates rather that the ‘ideological’ militants have served their purpose and can be largely bypassed.

Dugin’s announcement that he had been sacked came after a petition calling on the MGU management to take precisely that step received more than 10 thousand signatures.   The arguments in favour were compelling, these including Dugin’s call, following the Odessa confrontation and fire of May 2, “to kill and kill and kill those responsible for atrocities in Ukraine”.   On the other hand, examples in Russia of people power are thin on the ground making it seem likely that other factors were at play.

This still seems the case, especially since MGU is reported to have denied termination of Dugin’s contract, not necessarily that the new appointment from May had been revoked.  It was Dugin who suggested that one meant the other. It seems equally unlikely that the ‘certain circles’ Dugin claims he was told were unhappy with his stand on Ukraine have rejected the fundamental view of Ukraine’s role in a Euroasian Union.  The Kremlin however now seems to have opted for efforts, with Medvedchuk’s help, to foist its version of ‘federalization’ on Ukraine, while apparently respecting its borders.  The interview on LifeNews is interesting not only because if came on the same day as the MGU denial.  Dugin is given the chance  to make outrageously dishonest claims about Ukraine and his explanation for the call to kill in this context would probably be supported by many viewers.  All patriots, he asserts, agree with him, and the petition was the dirty work of the Ukrainian Right Sector. On the other hand, a ‘sixth column’ may be ready to punish him for his just wrath in their wish to appease the west.

Any reports suggesting Dugin’s political demise are thus exaggerated – tragically for Ukraine, as well as for Russia itself.