Volodymyr Semytyaha alive, though still held by the terrorists 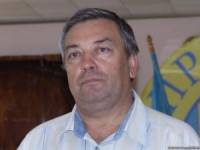 At least one piece of good news at a very dark time.  The reports earlier in the day about Volodymyr Semytyaha, head of the Prosvita cultural society were hopefully incorrect.  Relatives say that they have managed to speak with Mr Semytyaha who is being held by the Kremlin-backed militants in the seized Luhansk regional administration. The militants have still not made any demands and are not saying when he will be released.

“We spent half the day near the building demanding that they gave us Volodymyr’s body.  Finally, after the scene, a man came out who said that he’s alive and that he could ring us if we want to make sure. And he did indeed ring. When we told him that the media were all writing that he had died, he laughed and said “That means I’ll live a long time”

As reported, Volodymyr Semytyakha was abducted by militants from the Ukrainian –Canadian Centre which he is director of on June 23.  Various sources reported on Tuesday that he had died of a heart attack on June 27.