Father Tikhon [Sergey Kulbaka), a Greek Catholic priest left home yesterday morning, driving his own car, and has not been heard from since.  His telephone is switched off.   Pastor Sergey Kosyak reports on his facebook page that Father Tikhon said nothing to relatives, friends or his parishioners about any plans for leaving Donetsk.  He has on many occasions received threats, and his car has had threats and insults daubed on it. 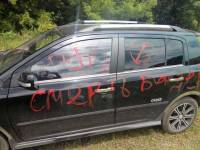 Father Tikhon is also the secretary of the inter-faith Council of Churches and Religious Organizations of the Donetsk Oblast, and is one of the organizers of the prayer ‘marathon’ in Donetsk.

Father Sergey, also actively involved in the prayer marathon, writes that they are making all efforts to find Father Tikhon and asks people to pray for him. 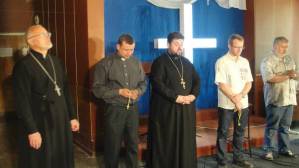 The grounds for concern are serious, the grounds for anger and frustration also, as can be seen by the image above of Father Tikhon’s car.  The graffiti shows clear signs that its ‘authors’ have been heavily influenced by the primitive propaganda spread about the Ukrainian Greek Catholic Church, and generally about all those who the Kremlin-backed militants - and Russian propaganda - view as ’enemy’.

The militants have already produced a ’constitution’ for their self-declared Donetsk People’s Republic.  This makes it quite clear that only the Orthodox Church of the Moscow Patriarchate will have a place in their ‘republic’.  Other churches and faiths in Donbas have already experienced harassment over the last months.