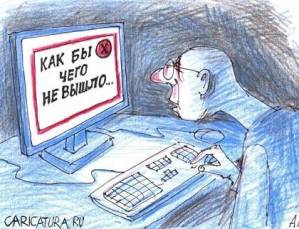 A new law just signed into force in Russia envisages penalties of up to 5 years imprisonment for what are termed ‘calls to extremist activity via the Internet’.  With a leading Crimean Tatar newspaper deemed extremist for using such unkind words as ‘annexation’ and ‘Russian occupation’, the dangers from this law are surely clear.  There is, however, more with the Kremlin planning measures aimed at detecting and nipping ‘extremist ideology’ in the bud.

The law signed by Russian President Vladimir Putin on June 30 imposes tough penalties for public calls to extremist activity and inciting enmity through extremist material on the Internet.  Legislative measures against ‘extremism’ were first introduced back in 2002. Their bite has been significantly strengthened since then, but the same dangerous lack of clarity remains as to what is meant by extremism.  Internet users are now wondering if they could receive visitations from the FSB or security service for re-tweeting or re-posting political anecdotes, cartoons or interviews with people the Kremlin doesn’t like.

Material is declared extremist by a federal court on application from the prosecutor or in the course of administrative, civil or criminal proceedings.  Any reliance on the judicial system to prevent abuse of such a woolly term is unwarranted.   In 2012, for example, the Federal List of Extremist Material included publications about Holodomor [the man-made famine in Ukraine in 1932/33] as genocide, as well as material about the crimes of the NKVD, the nationalist leader Stepan Bandera etc., with the classification approved by court rulings.

A number of opposition websites in Russia have been blocked by the controlling body Roskomnadzor. With respect to the website Lenta.ru, this was over an interview of a member of the Ukrainian right-wing nationalist party Right Sector.  The interview quoted a 2008 interview given by Dmytro Yarosh, head of the party, in which he stated that “"sooner or later we are doomed to fight the Moscow empire."  This was deemed to constitute ‘dissemination of extremist material’ and contain statements aimed at inciting ethnic enmity.

The advantage of vague concepts like ‘extremist activity’ is that they can be applied or not as the relevant authorities choose.  The foreseeability which any law should provide is seen only in the fact that opponents of the regime can quite realistically anticipate that any behaviour will be labelled ‘extremist’.  The head of the Mejlis of the Crimean Tatar People, Refat Chubarov has just been banned from returning to his native Crimea over alleged ‘extremism’ with this clearly linked to his opposition to Russia’s effective seizure of the peninsula.

The law also gives the government responsibility for drawing up and implementing measures to forestall and counter ‘extremism’.  The Interior Ministry has already prepared a ten-year strategy for fighting ‘destructive ideology’.  Kommersant explains that since the main channel for disseminating ‘destructive information’ is the Internet, methods are needed to not only cut out aggressive ‘demonstrations of extremism’ but to also create a system of monitoring and counter-propaganda.

The main concept, the Interior Ministry explains is “while retaining and strengthening the enforcement bodies component in fighting specific manifestations of extremism, to radically heighten the effectiveness of countering radical ideology, placing reliable barriers in the way of its penetrating public consciousness”.

“Impact from foreign and domestic destructive forces are first and foremost linked with the spreading of extremist ideology and aimed at destabilizing the socio-political system in the Russian Federation.”

“The main instrument for the radicalization of society” lies in “protests which turn into mass riots”.  The main hotbed of destructive, including extremist, ideology is the Internet.  A law which recently came into force imposes stiff penalties for calls to undermine Russia’s territorial integrity, with this including calls to return the Crimea to its internationally recognized status as an autonomous republic within Ukraine.

It remains to be seen how stringently and / or selectively the new ‘extremism’ law gets applied,  Russians have already developed techniques for bypassing current blockades on websites and any measures directed at totally controlling the Internet these days are doomed to at least partial failure.

The likely impact of the ‘prophylactic’ measures should not be underestimated.  Even in Soviet times there were always people who fully understood how hollow the propaganda was.  Most learned to keep their heads low, while a considerable part of the population was duped.

The new measures are doubtless also aimed at ensuring that people do not stick their necks out and effectively censor themselves. ‘Prophylactic’ indoctrination via a largely subservient media is combined with chilling reminders of the likely consequences of bucking the system.   We are already witnessing attempts to crush protest among the Crimean Tatars and use charges of ‘extremism’ to neutralize or hound out vocal opponents of Russian annexation.  The scope for abuse, for real repression, is frighteningly broad.