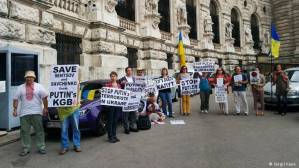 Protest in Vienna calling for the release of Oleg Sentsov and Nadiya Savchenko, July 10

Russia is claiming that Ukrainian film director Oleg Sentsov ‘automatically’ received the Russian citizenship he opposed, that Ukrainian officer Nadiya Savchenko, abducted by Kremlin-backed militants, somehow just appeared in Russia.  And if that were not enough, the Russian Foreign Ministry asserts that it’s Ukrainian troops who are shooting at Russia.

Ukraine’s Human Rights Ombudsperson Valeria Lutkovska announced on July 10 that the Ukrainian film director whom Russia’s FSB is accusing of ‘terrorism’ has not been allowed consular services from Ukraine on the grounds that Sentsov was ‘automatically’ granted Russian citizenship.  According to Russia’s Ombudsperson Ella Panfilova, Russia asserts that this was legitimate since Sentsov had not formally signed a statement rejecting Russian citizenship.  The formal procedure for this required his presence at one of four places in the Crimea.

Sentsov has been in custody since the evening of May 10, and since this made rejection of Russian citizenship physically impossible,   the argument would under any circumstances be invalid.  In Sentsov’s case, his arrest and the terrorism charges are widely believed, both in Ukraine and abroad, to be linked with his categorical – though peaceful – opposition to Russia’s invasion and annexation of the Crimea.  As reported, he reiterated this protest at the court hearing on July 7 which extended his detention until Oct 11. Given Russia’s claim, his words should be heard in full.

“I wish to protest against attempts to deprive me of Ukrainian citizenship since I have been and I remain a citizen of Ukraine. I am not a serf to be flung, together with land, into citizenship. I did not write any applications to receive Russian citizenship and reject Ukrainian.  I do not accept the Russian Federation’s annexation and military seizure of the Crimea and consider any agreements which the illegitimate Crimean government makes with Russian to be invalid”

Sentsov is reported to be registered in the Lefortovo SIZO [remand prison in Moscow] as “a Russian national with a Ukrainian passport”.

Sentsov’s lawyer, Dmitry Dinze has announced that the defence will be appealing against the extension of his detention on the grounds that the Crimean judge and prosecutor did not have Russian citizenship and were not entitled to act as representatives of Russia.

Oleg Sentsov, Alexander Kolchenko, Gennady Afanasyev and Oleksiy Cherniy are accused by the FSB of a ‘Right Sector’ terrorist plot to carry out ‘diversionary-terrorist’ acts in Simferopol; Yalta and Sevastopol, and in the last of these to destroy a number of buildings, railway bridges and power lines.  None of this actually happened, and the only ‘evidence’ appears to be testimony given by Afanasyev and Cherniy.  Since Sentsov has alleged that he was tortured in the Simferopol SIZO to extract ‘confessions’, the value of any such testimony is more than questionable. Further details here.

On July 10 Voronezh Regional Court [Russia] upheld the detention of Ukrainian pilot Nadiya Savchenko until August 30, allowing only her appeal against the failure to provide her with material translated into Ukrainian.

The Russian authorities are claiming that Savchenko crossed the border pretending to be a refugee and was there found to be a person suspected of involvement in the killing of two Russian journalists on June 17.  They appear unconcerned that their story is rendered entirely implausible by the video which went viral back on June 20.  This shows Savchenko taken captive and being interrogated by Kremlin-backed militants. More details here.

Despite such damning evidence of collaboration with the militants, and no grounds for linking Savchenko with the journalists’ deaths, the Russian authorities are sticking to their story.  Vladimir Markin, spokesperson for Russia’s Investigative Committee is reported to have said that Ukrainian President Petro Poroshenko’s chances of obtaining Savchenko’s release were the same as his chances of becoming President of America.  Ukraine’s Justice Minister Pavlo Petrenko has announced that he will be asking the Council of Europe to recognize that Savchenko is being held as a hostage in Russia.

There has been no comment from the EU or other western countries despite strong grounds for believing that the Russian authorities have decided to prosecute a person captured in another country and taken illegally across the border by militants.  The latter are likely to have provided the only ‘evidence’ in this new murky case.

This is not the first time that Russia’s Foreign Ministry has claimed Ukrainian soldiers have fired at a Russian border crossing.  It asserts that there were around 230 Ukrainian refugees who ‘by sheer chance’ were not injured, and demands cessation of fire onto Russian territory.  Otherwise, it threatens, the responsibility will lie firmly with Ukraine.

There have renewed reports of militants and military technology entering Ukraine from Russia.  It seems likely that if there was shooting, it was linked with this incursion which Moscow is at very least failing to curb.

Initial titles for this text, such as “Forced to be Russian” and “Ukraine accused of attacking Russia” were reluctantly discarded after a previous true report “Russia accuses Ukraine of annexing the Crimea” attracted the attention of the Reddit.com Not the Onion site.  This found the title to be “so mind-blowingly ridiculous” that you could have sworn it came from the satirical Onion website.

There is little humour in any of the above, so new mind-blowingly absurd titles will be left in the original Russian   Any credit due to the Kremlin and Russian Foreign Ministry.