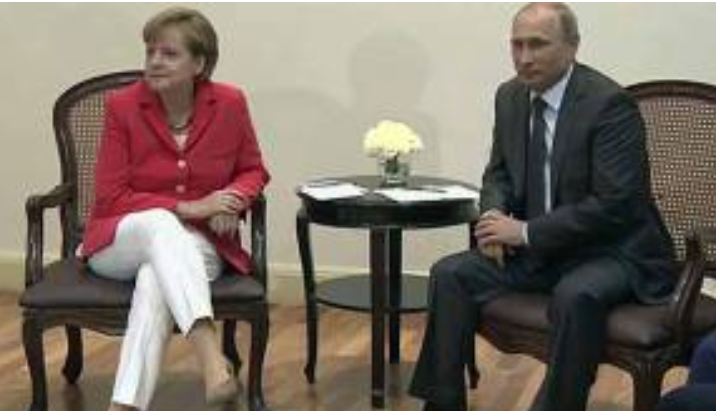 A more cynical fiction than the addition of 11 Kremlin-backed militants to a meaningless EU blacklist instead of real economic sanctions against Russia as aggressor would be difficult to imagine.  Except perhaps the latest calls for ‘peace negotiations’ made by Vladimir Putin and German Chancellor Angela Merkel at the World Cup final

On July 11 the European Union added 11 more names to its list of individuals facing “restrictive measures in respect of actions undermining or threatening the territorial integrity, sovereignty and independence of Ukraine”.  Largely theoretical travel restrictions and symbolic freezing of ‘assets’ are purportedly needed  “in view of the gravity of the situation in Ukraine”.  They came a week after the G7’s one month deadline for the Kremlin to take real measures to stop the unrest in Ukraine elapsed on June 4, and shortly after an EU three-day ultimatum was ignored. “Third-level sanctions” were to follow if Russia did not take serious steps.  Neither real steps, nor real sanctions followed, only 11 additional names on a personal sanction list which had already demonstrated its ineffectiveness.

A more cynical fiction would be difficult to imagine.  11 members of the self-proclaimed Donetsk and Luhansk People’s Republics have now been ‘blacklisted’.  They include the Russian PR manager turned ‘prime minister of the Donetsk People’s Republic [DPR] Alexander Borodai; DPR ‘minister of security’ Alexander Khodakovsky and Alexander Khryakov, DPR ‘minister of information and communications’.  These individuals join those from earlier lists such as DPR’s ‘defence minister’ Igor Girkin [nom de guerre Strelkov], a Russian national believed to be working for Russia’s GRU military intelligence service, former self-styled mayor of Slovyansk Vladislav Ponomaryov and others.

All these people are certainly implicated in the ongoing carnage in eastern Ukraine. So too are the Russian mercenaries brought to Ukraine in huge numbers.  Neither the ‘official separatists’ nor those openly paid to fight are more than pawns in a game with the lavish supply of arms – and the orders – coming very clearly from Russia.  This was stated quite clearly by ex-president Leonid Kuchma who has represented Ukraine at negotiations. He saw no need for any meetings with the militants – “it’s not they who decide”, he said.  A 24-year-old Armenian, Artur Gasparyan who claims to have come to Donbas to fight for a cause, not money, told Radio Svoboda, that “The DPR is a fiction – decisions are taken by others”

Any attempt to present the original ‘separatists’ as being behind the conflict ignores their evident failure back in March and early April when ‘separatist’ demonstrations in Donetsk, Luhansk and Kharkiv gathered pro-Russian crowds of no more than a couple of thousand.

The scale changed dramatically on April 12 and 13, with the appearance in cities like Slovyansk [Donetsk oblast] of heavily armed and well-trained men carrying out synchronized operations.  The key point was spelled out clearly by US Ambassador to Ukraine, Geoffrey Pyatt  “Militants in eastern Ukraine were equipped with Russian weapons and the same uniforms as those worn by Russian forces that invaded Crimea”.

NATO and the US have repeatedly pointed to Russia’s active role in arming and training the militants, and in at very least ensuring unimpeded entry into Ukraine of large numbers of Russian nationals coming to fight.  This is not questioned by EU states either, except when it comes to practical response – or attempts to mask their effective failure to respond.

Two countries are believed to be most responsible for the EU’s stalling on anything more than expressions of ‘deep concern’.  France is insisting on selling two Mistral warships to Russia and training the Russian navy to use them and does not want sanctions stopping this.  German business interests have come out equally strongly against sanctions.

While ostensibly insisting that Moscow use its influence over the militants, both France’s President Francois Hollande and German Chancellor Angela Merkel have most assiduously lobbied for Ukraine to extend a ceasefire that only Ukraine was observing and to engage in ‘peace talks’.  Merkel in particular has pushed for the inclusion of Viktor Medvedchuk, Russian President Vladimir Putin’s close associate and one of the first people against whom the US imposed sanctions back in March.

Merkel and Putin are reported to have met briefly before the World Cup soccer final in Brazil and again stressed the need to “step up peace efforts on Ukraine”.

Calls for negotiation, rather than for brute force, sound good until you consider who is making them.  Aside from the release of OSCE military observers held hostage by the militants, Russia has taken no steps to de-escalate the situation. Quite the contrary, with reports backed by photographs and video footage indicating renewed movement in recent days of Russian military technology across the border into Ukraine.

Moscow has, however, engaged in another elaborate attempt to distance itself from the militants it is backing. On July 3 a video was circulated in which Strelkov warned that the militants would be slaughtered if Russia did not come to their aid.  This refrain was repeated over the following days, together with constant reports that the militants were ‘disillusioned’ with Moscow over its alleged failure to support them.  There is certainly no evidence at present that Russia has dumped them.  Over the last few days, numerous reports of men, tanks and other equipment crossing into Ukraine from Russia have coincided with loud claims from Russia that Ukraine has bombed its territory and that this will have grave consequences.  Strelkov is now also singing that tune.  Early Sunday evening, July 13, he told LifeNews that “Kyiv’s aim is to draw Russia into military conflict in the south-east of Ukraine”

The future role of the motley bunch of militants calling themselves the DPR and LPR remains unclear.  There are, however, no grounds for doubting that this will be decided by the Kremlin alone.

Instead of acknowledging Moscow’s refusal to adhere to the commitments it gave at the Geneva talks and keeping to its own apparent promises regarding sanctions, the EU has opted for a pitiful pretence . Through purely cosmetic sanctions, it is effectively collaborating with Russia and placing not only Ukraine, but Europe’s own security in danger.