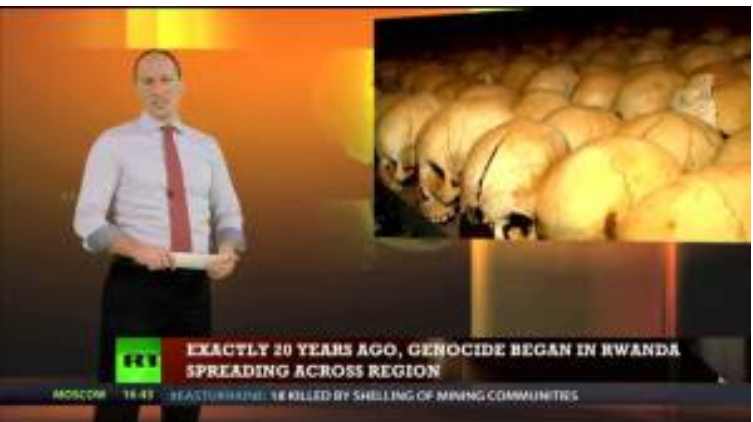 The Kremlin-funded TV channel Russia Today has first shown, and then removed, a film in which it claims that ’the junta’ in Kyiv and its ’Nazi mercenaries’ are carrying out genocide, ethnic cleansing and starving its population, while children are being taught Nazi slogans and salutes.

The Kremlin should surely investigate why Russia Today, the TV channel it lavishly funds took so much trouble to produce a ‘Truthseeker’ programme on the ‘Kyiv junta’s’ alleged ‘genocide in eastern Ukraine only to remove all trace of it from its site.  Why if, as it claims, eyewitnesses have spoken of “unarmed civilians being systematically massacred – village after village, town after town - all under complete mainstream media silence”, has Russia Today followed suit ?

The video for the moment can be found here Can and should, most particularly by broadcasting councils in all countries where Russia Today is widely watched as a ‘counterweight to the mainstream media’.  The channel can also be accessed in hotels as the Russian counterpart to the BBC or Deutsche Welle.

Anybody who happened to be watching RT, or simply flicking channels, on July 13 came upon a truly disturbing ’documentary’.   After contentious assertions about the US’s role in the Ruanda Genocide, the viewer is told about another genocide supposedly taking place before our eyes, in eastern Ukraine where, according to RT, Kyiv is carrying out daily mass bombings of unarmed civilians.  They are ‘reportedly using “cluster bombs designed to kill or maim everyone in the surrounding area”.

The viewer is then shown the funeral of Vanya who had celebrated his 5th birthday the day before “the junta’s cluster bomb blew his leg off”.

There are some staggering moments, such as the assertion by Eric Zuesse that the current government in Kyiv is “the most far-right-wing government on the face of the earth.”  For anyone wishing to appreciate the full depth and scope of this ‘investigative historian’, further thoughts on the ‘ethnic cleansing’ he claims is underway in Ukraine can be found in “Who profits from Ukraine’s war”.  The author states that  “at the bottom levels (the level of the troops who are carrying it out) there indeed is a very strong ethnic hatred of the Russian-speaking population, and so it is overtly naziistic (or hate-driven fascism) at those lower levels”.  His, as it were,  scholarly,  focus is, however, on “the aristocratic psychopaths at the top of the operation”.

The TV producers clearly decided that all this was too complex for their viewers and provide catchy labels like ‘openly Nazi mercenaries’ and “the direct successor to Hitler’s Wehrmacht” as their way of describing the Ukrainian military.  The latter, we are told, are directly targeting civilians “who had no other crime but their ethnicity”.

Some points are written out on the screen for maximum effect.

“One day the Right Sektor, National Guard, Azov and Dniepr Battalion mercenaries came to Saurovka village and they instilled European values. They took the men alive and cut off the limbs. First their arms, then legs, then the heads. They did not cut the women – they raped them.”

Underneath in capitals: POROSHENKO: WE WANT TO INSTILL EUROPEAN VALUES”

RT claims that the military have also “murdered and tortured” journalists, naming the Pyervy Kanal journalist Anatoly Klyan almost certainly sent to his death by the Kremlin-back militants and Italian journalist Andrea Rocchelli

The renowned journalist Anne Applebaum called the programme “sick and distorting”, and some parts are indeed so cynical and full of lies that it is difficult to even write about them.  These include the claims that the ‘junta’ has prevented people escaping, condemning them to try to survive on berries, with stark predictions that come winter there will be scenes like those during the blockade of Leningrad in World War II.  Or the accusation that the military are “walking up to somebody, disembowelling them, a child”.  They are accused of “even bombing the wheat fields”.  Ukraine’s President Petro Poroshenko is claimed to have labelled nearly half the country as “subhuman” with extensive coverage aimed at linked the Kyiv government to Nazi Germany and its treatment of Slavs as ‘Untermenschen’.

It would be difficult to name one most offensive moment, but certainly in the running would be the manipulative images of young children and claims that they are taught Nazi slogans and salutes from an early age.

This truly sick broadcast came just two days after a Russian Pyervy Kanal interview made world headlines with its assertion that the three-year-old son of a militant had been crucified by Ukrainian soldiers on the non-existent Lenin Square in the centre of Slovyansk.  There was outrage and calls for those responsible to be called to account.   What was meant, it should be stressed, was those responsible for such primitive war propaganda and misinformation since the story was a pack of lies.

It may have been the fallout from that scandal which led to RT quietly removing the offensive material.  It may even be the renewed calls for third-level sanctions as Russia continues to encroach upon Ukrainian territory, amass troops on the border and openly support the militants in eastern Ukraine.   Or it is simply a ploy - the film was, after all, viewed by a large number of people many of whom will have no idea how grossly they were being misinformed.

The smoking gun remains and warrants close scrutiny given the  overt use made of manifest lies to try to justify Russia’s aggression against Ukraine, to fuel tension in Donbas and incite Russian nationals to come to eastern Ukraine to fight the Kremlin’s undeclared war. 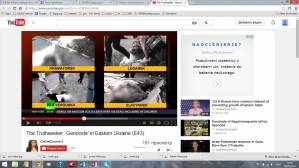 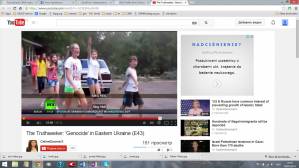