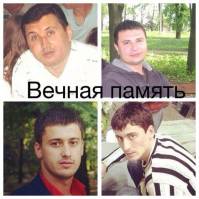 Faced with the murder by Kremlin-backed militants of four members of a Slovyansk evangelical church, Russia’s state-owned ‘Voice of Russia’ radio could have stayed silent.  It opted for a far more cynical approach.  Against all evidence, it reports that the men were murdered by the Ukrainian army for helping ‘insurgents’.

In so doing, it turned upside down a report by Anton Herashchenko, advisor to the Minister of the Interior on Monday.  Herashchenko is reported to have stated that a grave had been found with the tortured bodies of two priests and the two sons of one of them.   Herashchenko asserted that they had been tortured for taking food to soldiers of the Ukrainian army.

Most incredibly, Voice of Russia actually quotes Herashchenko as its source, without providing any link which could be checked.  In its version, however, the Interior Ministry spokesperson said that the men had been killed by “Ukrainian nationalists”

Herashchenko gave no details with this used by Voice of Russia to enable mention of a couple of people who have allegedly supported separatist calls.  The Russian radio station could not even refrain from slandering one priest, Father Yury Ivanov, from the Orthodox Church of the Kyiv Patriarchate.  As reported here, Father Yury disappeared on July 8, and there is every reason to believe that his abductors were from the self-proclaimed Donetsk People’s Republic.

The same militants are also believed to be behind the abduction on Tuesday of Polish Roman Catholic priest from Horlivka, Father Viktor Wąsowicz

The murder victims were in fact the two sons – Ruvim and Albert - of Pastor Alexander Pavenko from the Slovyansk evangelical Church of the Transformation, as well as deacons of the church Viktor Brodarsky, and Volodymyr Velychko.

Their abduction during a religious service was reported on June 8 with Slovyansk Pastor Petro Dudnik cited as the source of the information.  It was quite clear that they had been taken hostage by the Kremlin-backed militants who 'accused' them of supporting the Ukrainian army.  The only doubt, in fact, concerns other forms of motivation, since some reports suggest that the militants were hoping to extort money in ransom for the young men.

Instead they tortured and murdered all four members of the church.  Perhaps those EU leaders who are insisting, together with Russian President Vladimir Putin, that the militants must be part of the ‘peace negotiations’ could take the opportunity to ask them why.