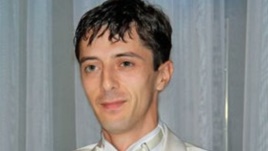 The European Court of Human Rights has ordered Russia to release from custody Khaiser Dzhemiliev, son of the Crimean Tatar leader and Ukrainian MP, Mustafa Dzhemiliev. Khaiser is being held in detention in the Crimea despite two rulings from Ukrainian courts ordering his release  ECHR’s application of Rule 39 ordering restoration of Khaiser’s right to liberty has thus far been ignored by the Crimean authorities under Russian occupation.

At a press conference on Wednesday with Mustafa Dzhemiliev and lawyer Arkady Bushchenko, justice minister Pavlo Petrenko pointed out the important precedent which the Court’s decision involves.  The Court has acknowledged Ukrainian courts’ jurisdiction and power to defend the rights of people on territory occupied by Russia.

Mustafa Dzhemiliev explained that his son, Khaiser, had been in custody since the tragic incident in May 2013 when Khaiser shot and killed Fevzi Edemov who was working as a guard to the family.  Although all the evidence indicated that the young man should be charged with manslaughter, and even the widow of the dead man confirmed that her husband and Khaiser had been on excellent terms, the authorities charged him with murder.  Mustafa Dzhemiliev stresses that from the outset the focus was on him, not his son,  He recounts how in early November he was offered a deal by people close to the then president Viktor Yanukovych – if he left the (opposition) Batkivshchyna party and joined the ruling Party of the Regions, his son would be freed the next day.  He could not accept such conditions and within a few days, the charges against Khaiser were made even more serious.

As reported here, the puppet regime under Russian occupation claimed that it did not trust the previous investigation and ordered a new one.  This was used as the pretext for a search of the Dzhemiliev home after Mustafa Dzhemiliev had been banned entry to the Crimea (see: OUTRAGE: Home of Mustafa Jemiliev searched ).

Khaiser’s case is now under investigation both by the Crimean investigators and by the Kyiv prosecutor.  The case was passed to the latter on the basis of the Ukrainian Law on the Occupied Territory.  According to Arkady Bushchenko, an application was made to requalify the crime as manslaughter through carelessness, and this was allowed.  Two Kyiv courts have now ruled that Khaiser should be released from custody.

It was because these rulings were ignored that Dzhemiliev approached the European Court of Human Rights, which informed Bushchenko on July 10 that temporary measures under Rule 39 had been applied.

Russia is so far refusing to comply, however Bushchenko believes that the Court’s authority is sufficient to ensure Khaiser Dzhemiliev’s release from custody.