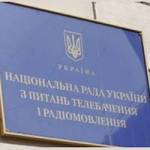 Ukraine’s TV and Radio Broadcasting Council decided on July 17 to apply to the courts for licences to be cancelled of providers who illegally broadcast the Russian channels Rossiya 1; NTV; TNT; Petersburg 5; Zvezda and REN TV.

The Council says that its decision is prompted by the dangers to Ukraine’s ‘information sphere’ and by the unauthorized removal of Ukrainian TV channels in the Donetsk and Luhansk oblasts and their replacement with Russian channels.

It warns that the broadcasting of these channels will be deemed a flagrant and systemic violation of legislation on television and radio broadcasting.  This will be used as the grounds for seeking to have such providers’ licences cancelled by the court

One of the first things that the Kremlin-backed militants have done after seizing control of an area is to replace Ukrainian with Russian channels.  All the channels mentioned above, and some others, have consistently presented events in Ukraine only from the point of view of the militants; have claimed Ukrainian atrocities, and have on a number of occasions been caught out using video material from a different country as their ‘proof’.