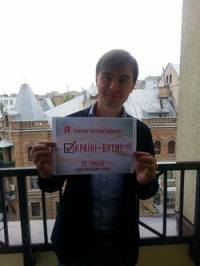 Yevhen Aharkov, journalist for TV 2+2’s Special Correspondent programme was detained by Russian Federal Migration in his hotel in Rostov where Ukrainian pilot Nadezhda [Nadya] Savchenko is being held in detention.  The migration authorities accuse him of something they call “illegal journalist activities”.

The Voronezh Administrative Court on July 18 fined Aharkov 2 thousand roubles and sent him to a migration detention centre in the village of Yelizavetovka, 160 kilometres from Voronezh.

The Ukrainian consul in the Russian Federation applied for Aharkov’s release under his personal assurance. This was turned down.

On July 3 TSN special correspondent in Russia Margarita Sytnyk and her cameraman were detained in Voronezh by men who claimed to be police officers. The latter questioned them, with the procedure videoed. Although the journalists had full accreditation, the Russian ‘officers’ questioned them regardless on the pretext (?) that an old lady had been robbed not far off.

The situation with Aharkov and his ‘illegal journalist activity’ is, however, almost certainly linked with the scandalous case involving Nadya Savchenko’s capture by Kremlin-backed militants and arrest and detention shortly afterwards in Russia.