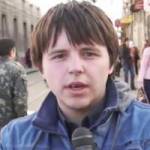 On Tuesday evening, July 22, Kremlin-backed militants abducted a freelance journalist working for CNN.  Geoffrey Pyatt, US Ambassador to Ukraine tweeted a statement of condemnation on Tuesday evening, and demanded his release.

Alexei Matsuka, a Donetsk-based journalist, reports that Skyba was seized inside the Hotel Donbas Palace while he was with a CNN film crew. Matsuka explains that he was helping the CNN team gather material about what is happening in the Donetsk oblast.

The militants put handcuffs on him and took him to the SBU [Security Service] building which the militants have seized.

On July 20 the terrorists detained Piotr Andruseczko, a Polish journalist from Nowa Europa Wschodnia who was photographing the Donetsk Railway building. He was also taken to the SBU building.  One of the militants told him that they have orders to detain all western journalists taking photographs in Donetsk.