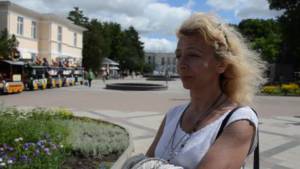 .Russia’s FSB has issued summonses to the heads of the Karman Art Centre whom they suspect of involvement in what they claim was a terrorist conspiracy organized by renowned Crimean film director Oleg Sentsov.  The FSB seems to find first aid courses particularly ‘suspicious’.

As reported,  Oleg Sentsov, and three other men, linked only by their active peaceful protest against Russia’s annexation of the Crimea, are in detention charged over supposed plans to carry out acts of terrorism.

The says that they were informed of this new turn by Halyna Dzhykayeva, the art centre’s director and actress.  She left the Crimea as a result., and now explains that on July 17 she was phoned by FSB officers, one from Moscow, one local, who asked her to come in for questioning.  They told her that she was in the case around Sentsov and the others as the organizer of a first aid course at the art centre.

“In the file there’s a phase that our director, Anton Romanov, went to meetings with Oleg Sentsov together with a group of actors. That’s in the file and now our actors and the Karman Art Centre are in danger because whether or not they were there is of no particular interest to the FSB.”  Dzhykaeva says that in fact the actors did not go either to meetings with Sentsov or to the first aid lessons.

She has not been informed what the actual criminal case is and whether a criminal investigation against her has been initiated.  She went to two such meetings with FSB officers and was supposed to have had the third on Friday, July 25.

The ‘link’ that the FSB have found with the art centre is over a first aid course which was initiated after armed soldiers without insignia first appeared in Simferopol [on Feb 27].  She was contacted by Gennady Afanasyev, one of the four men facing charges, who asked if  he could hold the first aid course at the art centre.

Since there is this tenuous link with Afanasyev and the first aid course was held, “according to the FSB logic, we were planning mass riots, mass victims and are part of a terrorist organization.”

She believes that all actors and staff of the art centre, 15 people in all, are now in danger. She is concerned for all of them and mentions in particular the one minor among them.  The FSB have noted that he has a photo on his VKontakte social network page where he has a toy pistol. “And that’s already suspicion of terrorist activity”.

Oleg Sentsov was arrested on May 10, though his lawyer, Dmitry Dinze, says that the detention was only made formal the next day, after he had been subjected to torture.

It only became clear what the four men are charged with on May 30 when the FSB finally   It claims that Sentsov; civic activist Alexander Kolchenko; Gennady Afanasyev and  Alexei Chirny are members of a Right Sector ‘diversionary terrorist group’.  Their main aim, or so the FSB version goes, was to carry out ‘diversionary-terrorist’ acts in Simferopol; Yalta and Sevastopol, and in the last of these to destroy a number of buildings, railway bridges and power lines.

The only action which appears to have actually taken place was that a Molotov cocktail was thrown into a Party of the Regions office.   Although all men were arrested long after the alleged terrorist acts were supposed to have taken place.

All four men opposed Russia’s aggression and occupation of the Crimea.  Kolchenko is also an environmental activist with pronounced left-wing views which make the accusation of involvement in a nationalist Right sector ‘plot’ especially implausible.

No less absurd is the suggestion that Sentsov who as well as gaining an international reputation as a secret film director, is also bringing up two young children by himself, should have master-minded the ‘plot’.

The fact that the other two men appear to have signed ‘confessions’ cannot be taken seriously since all four have indicated that they were physically and psychologically ill-treated in Simferopol, before being taken to the Lefortovo prison in Moscow.

Sentsov was, however, an active participant in AutoMaidan and an opponent of Russia’s land grab.  Right Sector has been constantly demonized by the Kremlin and Russian media, and claims that they were involved in a terrorist plot did not, unfortunately, come as a surprise.

The cynicism, however, is extreme with four men who have no links with the party having been in detention since May.  There were no terrorist actions, and the only ‘evidence’ is likely to be in confessions obtained under duress.