UN: Reign of Fear and Terror inflicted by armed groups 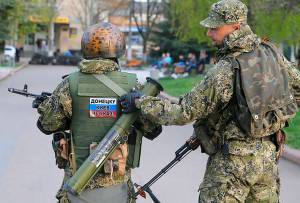 The latest report by the Office of United Nations High Commissioner for Human Rights documents how armed groups in eastern Ukraine “continue to abduct, detain, torture and execute people kept as hostages in order to intimidate and “to exercise their power over the population in raw and brutal ways.”

The following is the OHCHR press release.  The report can be downloaded in full here

Well organized and well equipped militarily, these armed groups have intensified their challenge to the Government of Ukraine, the report says. In response, there has been an acceleration of Government security operations during July in the areas still under the control of the armed groups, with heavy fighting located in and around population centres, resulting in loss of life, property and infrastructure and causing thousands to flee.

“The reports of increasingly intense fighting in the Donetsk and Luhansk regions are extremely alarming, with both sides employing heavy weaponry in built-up areas, including artillery, tanks, rockets and missiles,” said UN High Commissioner for Human Rights, Navi Pillay.  “Both sides must take great care to prevent more civilians from being killed or injured,” she added. “Already increasing numbers of people are being killed with serious damage to civilian infrastructure, which – depending on circumstances – could amount to violations of international humanitarian law. The fighting must stop.”

The deteriorating situation in eastern Ukraine is impacting adversely on the rest of the country, with more than 100,000 people fleeing the areas of fighting having to be temporarily accommodated in other parts of Ukraine.

The latest report covers the period of 8 June to 15 July 2014 and is the fourth in a series of reports produced by the 39-person United Nations Human Rights Monitoring Mission (HRMMU) deployed in Ukraine by the High Commissioner for Human Rights in mid-March.

The report points out how impunity in the areas under the control of the armed groups in the east has led to the collapse of the rule of law. It lists examples of some of the 812 people who have been abducted or detained by these armed groups in the Donetsk and Luhansk regions since mid-April. “Some of those detained by the armed groups are local politicians, public officials and employees of the local coal mining industry; the majority are ordinary citizens, including teachers, journalists, members of the clergy and students.” The Monitoring Mission has received numerous reports of acts of ill-treatment or torture of these detainees, as well as killings by the armed groups which frequently seek ransom or, more recently, use the detainees to dig trenches or send them to fight on the front lines. Some abductions appear to be totally random. In addition, the Office of the High Commissioner reports cases of people being detained by the Ukrainian armed forces and some cases of Ukrainian nationals who allegedly have been taken and are currently detained in the Russian Federation on various charges.

New allegations of executions have arisen, some of which have been verified by the Monitoring Mission. Following the retreat of the armed groups from Slovyansk on 5 July, a journalist uncovered documents indicating that armed groups had been holding ‘military tribunals’ and sentencing people to death. ‘Execution orders’ were found signed by the ‘Commander-in-Chief’ of the armed groups.

Since the end of the ceasefire on 30 June, the Government has regained control of large parts of the Donetsk and Luhansk regions that were previously under the control of armed groups. But this has come at great cost, with increasing numbers of people being killed and injured and serious damage to property and infrastructure. In addition, new concerns arise as the Government restores law, order and security in those territories. The report urges the Government to ensure the full application of international human rights norms and apply adequate human rights guarantees, including avoiding reprisals, when identifying those suspected of violating the law while such areas were under control of the armed groups.

Casualty figures are hard to gauge reliably, the report says. However, based on the best data available, conservative estimates by the Human Rights Mission and the World Health Organisation put the number of those who have been killed from mid-April to 15 July as 1,000 people. As of 26 July, at least 1,129 people have been killed and 3,442 wounded. Material damage is also documented, and the Government estimates the cost for the rebuilding and revitalization of the east to be at least 8 billion UAH (about 750 million USD). The Government is proposing to cover these costs, along with those of its security operation in the east, by cutting social programs, social benefits and other areas that will affect the whole country, the report notes.

The report notes the impact of the current economic recession facing Ukraine and the “dire” situation in the east, which is the country’s centre for heavy industry. Public buildings have been seized, banks and other financial institutions have closed, factories and businesses have shut down and some big industrial enterprises and mines have been severely damaged. Infrastructure like electricity, water and sewerage plants and other public utilities have been damaged, cutting off essential services to the remaining residents and businesses. “With the economic life of Donetsk and Luhansk now crippled, the impact on the rest of the country will be severe,” the report says.

The human rights situation in Crimea remains of great concern. Harassment and discrimination against Ukrainian nationals, Crimean Tatars, religious minorities, minorities in general and activists who opposed the 16 March “referendum” have intensified, the report states. NGOs have warned of a possible new wave of internally displaced persons (IDPs) from Crimea during the next few months as new restrictions take effect and make people’s lives there untenable. “This would include business people who were having serious difficulties with continuing to operate their businesses in Crimea; lecturers and teachers because they fear they will be sacked at the beginning of the new academic year for holding Ukrainian nationality or because they are Crimean Tatar; and families with sons of military age who do not want to be called for service into the Russian Federation army.”

Currently the vast majority (86%) of IDPs are from the east, with UNHCR estimating the total to be 101,617 as of 25 July - an increase of more than 15,000 since the reporting period ended on 15 July. While central government has now begun to provide resources and coordinate and plan better, a number of serious problems remain to be resolved.

Although the majority of Ukrainians outside the east continue to be able to exercise their freedoms of expression, association, peaceful assembly, movement and religion or belief, the report notes some worrying trends. “As the severity of the violence increased in the east and the crisis there dragged on, opinions became more polarized in Ukraine. As a result, the level of hate speech has escalated dramatically, especially on social media, but also in demonstrations and protests and even in Parliament,” the report says, adding that, the level of ‘anti-Russia’ rhetoric has increased along with the physical targeting of Russian-owned banks and businesses on the grounds that they are ‘financing terrorism.’

Harassment, intimidation, manipulation, abductions, detentions and enforced disappearances of journalists have continued to occur in the east, and at least five journalists have been killed since the fighting began in April, the report notes. Cases from Donetsk in recent days reflect these concerns: a Ukrainian freelance journalist in Donetsk was abducted by the armed groups, then released after having been ill-treated. One Russian journalist was detained by the Ukrainian armed forces; his whereabouts were unknown for some time and he was then deported by the Ukrainian authorities.

The report also discusses new legislation being introduced as part of the Government’s reform. It notes the recent signing of the trade agreement with the European Union that completes the Association process and the publication of the much anticipated new proposed amendments to the Constitution that provide for a degree of regional autonomy and the increased use of local languages. These latter two issues were at the centre of demands being made by the residents of eastern Ukraine and their not being addressed led to the current conflict.

Despite the huge challenges the Government of Ukraine faces as it restores law, order and security as well as combats armed groups in the east, the report concludes that there is an urgent need to prioritize attention to good governance, rule of law and human rights issues in line with recommendations made by the United Nations human rights mechanisms and the work of the Human Rights Monitoring Mission (described in an Annex to the report). The report notes that the Government “needs to address the wider systemic problems facing the country with respect to good governance, rule of law and human rights. This requires deep and badly needed reforms, especially as Ukraine seeks to fulfil its EU aspirations and establish a democratic and pluralistic society.”

“The horrendous shooting down of the Malaysian Airlines plane on 17 July came just after the cut-off date of this report,” Pillay said. “This violation of international law, given the prevailing circumstances, may amount to a war crime. It is imperative that a prompt, thorough, effective, independent and impartial investigation be conducted into this event.”

“I would like to stress to all those involved in the conflict, including foreign fighters, that every effort will be made to ensure that anyone committing serious violations of international law including war crimes will be brought to justice, no matter who they are,” the High Commissioner added. “I urge all sides to bring to an end the rule of the gun and restore respect for the rule of law and human rights.”