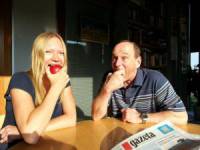 A day after the EU and USA announced new, tougher sanctions, Russia has bitten back by banning Polish fruit and vegetables.  This is not the first time that Poland has faced punitive economic sanctions believed by most to be linked with its position on Ukraine.

In January 2014, Russia suddenly imposed a ban on Polish and Lithuanian pork.  It claimed that four wild boar had been found to be infected with African Swine Fever near the Belarusian border.  Poland and Lithuania just happened to be the strongest advocates for Ukraine within the EU, and Poles and Lithuanians were providing enormous moral and material help for the Euromaidan movement.  The ban for both countries hit meat producers hard.

In fact, a mere five days later Russia banned all imports of livestock, fresh pork and certain pig products from the EU.  The latter has turned to the World Trade Organization over these restrictions.

Now the ban is on Polish fruit and vegetables.  There is again an official pretext: Reuters reports that Russia’s Veterinary and Phyto-sanitary Surveillance Service will be imposing the ban from Aug. 1, due to "the violation of certification and the identification of quarantine products".

Few are in any doubt that Poland has been hit by sanctions now because of its advocacy for a strong position on Russian aggression and hard-hitting sanctions.

The response from Polish business publication Puls bisnesu was swift and on the mark.  Deputy director, Grzegorz Nawacki called on consumers to join in an action of moral support and solidarity with Polish producers “Eat apples, drink cider”.   Nawacki was unconvinced by the official reasons given and wrote that the ban on Polish fruit and vegetables is because this will most hurt Poland.  Almost half of all apples in Poland are imported to Russia so the impact on Polish producers will be enormous.  By evening a number of Polish journalists and politicians had joined in the action, including the authoritative newspaper Gazeta Wyborcza.

Poland is not a rich country, and such an economic blow will hit people hard.  There has been massive support from ordinary Poles, as well as from official bodies, for Ukraine since the beginning of EuroMaidan.

As well as the undeclared war unleashed on Donbas, Russia is also using all economic levers to put pressure on Ukraine.  One response from Ukrainians has been to call for a boycott of all Russian products.

Surely a call now to buy Polish fruit and vegetables would also be a good way to express recognition of the solidarity shown by Poles?.   United efforts and solidarity are urgently needed now to oppose overt economic thuggery.