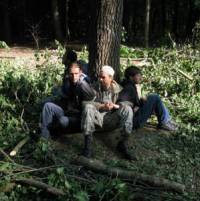 Yevhen Kotlyar (left) and two other tree-defenders in 2010.  Yevhen was killed on Maidan on 20 February 2014

Four years after Kharkiv police stood back and let peaceful Gorky Park tree defenders be beaten up by unidentified men, a Ukrainian court has finally allowed the cassation appeal and quashed rulings which saw no grounds to question the police behaviour.

In May 2010 the Kharkiv City Executive Committee passed a decision to fell 503 trees in Gorky Park, many centuries old, in order to build a road and hotel facilities on park territory. Armed with this decision and their saws, workmen began felling the very next day.

At the very beginning, the police actually responded when called by activists, ascertained that the loggers did not have the necessary permits and stopped the tree felling.

By the next day, the police, clearly following instructions from above, no longer defended either the law or peaceful protesters endeavouring to counter lawlessness.  The trees were felled without any of the permits required and during those first days without any safety measures or even a cordon around the area.

Both the (then acting) Mayor, Gennady Kernes and governor Mykhailo Dobkin claimed – without any justification - that the tree-felling was legal.

There were flagrant cases where young athletic-looking men beat up protesters, while an excavator also injured several people. The police during all of this did absolutely nothing.

There was ample video and photographic evidence to back this.

The video here: www.youtube.com shows how unidentified individuals in black, together with workmen holding their saws turned on charged the tree defenders. Several of the latter were injured. Despite the fact that it was the peaceful protesters who were attacked, that none of them committed any offences, and most certainly did not show resistance to the police, the latter only detained them.

On the video here www.telekritika.ua   one of the workmen cut down a massive tree despite it being clear that it would have to fall on another tree holding a protester.

Despite all of this, on May 24, 2011 Judge Spiridonova from the Kharkiv District Administrative Court examined a suit brought by a large number of claimants against various police bodies.

She heard police officers who appeared in court and denied the charges.

She also saw the video footage which gave the lie to such denials, but stated that it did not provide ‘factual data’ confirming the claimants’ assertions.

Her ruling found that “during examination of the case neither the claimants nor their representatives had provided proof that the police had not reacted specifically to their cries “Police!”. Nor had they, at the court’s demand  provided any proof as understood by Article 70 of the Code of Administrative Proceedings” which would indicate what specifically with relation to them constituted police inactivity.”  The appeal court went through the same imitation of court proceedings only to find no grounds for the suit.

The High Administrative Court on June 26 2014 passed a ruling to fully allow the cassation appeal of a suit brought against the Kharkiv city and regional police.  The applicants, represented by Arkady Bushchenko, had demanded that the actions or failure to act of the police be found illegal, and sought compensation.  They asserted that during the protests in Gorky Park in Kharkiv, police officers had not reacted to calls for the police to help, had not taken any actions to safeguard public order and protect people being attacked by unidentified individuals.

This, finally, is a case which need not go to the European Court of Human Rights.

There is enormous poignancy in this victory which is very likely thanks to EuroMaidan and the change in regime it brought.

One of Gorky Park defenders was Yevhen Kotlyar, a Zeleny Front activist.  In one typically fearless move he and another activist tied themselves to trees hoping that this would stop the barbarism. It did not.  Harrowing images were sent even to the Council of Europe’s Human Rights Commissioner of the city council’s logger sawing down a tree with Yevhen on it.  He managed to leap to safety.