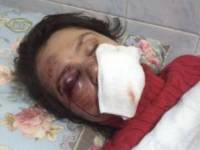 Russia’s Izvestia newspaper reports that Ukrainian national Andrei Zinchenko has been released after spending more than 6 months in detention and granted temporary asylum.  Zinchenko is suspected of involvement in the savage attack on journalist and EuroMaidan activist Tetyana Chornovol.  His extradition from Russia had been sought by Ukraine’s Prosecutor General and he was therefore arrested on Feb 6, 2014, and detained in a Moscow SIZO [detention unit].

Since the Izvestia coverage of this news and of the attack is highly specific, it would be well to recall some details about the attack.  Chornovol, then 34 and a prominent journalist known for fearless reporting and exposure of many corrupt dealings, including those linked with ex-President Viktor Yanukovych was attacked in the early hours of Dec 25, 2013.  A car blocked her path near Boryspil and forced her to the side of the road.  She was brutally beaten up and left for dead.  Her car was thankfully noticed and she was taken to hospital with multiple injuries.

Chornovol had the presence of mind when she realized that she was in danger to turn on the video register on her dashboard, and this recorded even the number plate of the Porsche Cayenne Turbo that her assailants were driving.  The outrage in Ukraine and abroad over the attack forced the authorities to promise a full investigation and prosecution of the culprits.  There were five arrests within days and a great deal of frenetic activity from the authorities, but also some suspicious attempts by the investigators, and the channels most under government control to link the attack with members of the political opposition.  The investigation finally descended into total farce in early February with the Prosecutor General’s Office announcing that the investigation was being terminated. The case, the investigators claimed, was ‘solved’ with the attack having been ‘hooliganism’, a case of road rage after Chornovol cut in front of another car.

Chornovol responded immediately, stating “The Prosecutor General’s Office has claimed that the attempt on my life was because I “cut in front” of somebody and thus “provoked” their hooligan actions.  I “cut in front” of Yanukovych and will continue to do so.  That is really the only reason for the attack on me.”

The investigation was restarted after Yanukovych, together with high-ranking officials, fled the country, however the extradition order is linked with the initial investigation.

Izvestia’s report that a person detained on an extradition request begins with the sentence: “Since the beginning of military action in the Luhansk and Donetsk republics 116 thousand Ukrainians have approached the Russian Federal Migration Service asking for asylum”.

It is the Kremlin-backed militants who refer to themselves as the Donetsk and Luhansk People’s Republics.  While Moscow has not recognized them, all pro-Kremlin media in Russia regularly use the term in all seriousness.

After reporting  Zinchenko’s asylum, Izvestia then explains that on Dec 25 Chornovol’s car “collided with a Porsche in which there were two young men.  They then supposedly beat her up …”  44-year-old Zinchenko is believed by the investigator to have been driving the Porsche.

Zinchenko, Izvestia reports, claims he was set up, that there were ‘big people’ behind the attack and that the people who carried it out had received too much publicity and needed to be extricated.  Zinchenko asserts that he and Roman [Roman Zalyubovsky . a 34-year-old security guard from Dniprodzerzhynsk, who was detained in January] were offered $25 thousand and a lawyer if they confessed.

According to Zinchenko’s lawyer Illarion Vasilyev, Zalyubovsky agreed to the deal and also shopped his client. Zinchenko was helped, allegedly by football fans, to flee to Russia, but was nonetheless arrested there.

Izvestia then diverts its attention to Chornovol whose career, it says, has taken dramatic strides forward.  The article makes various assertions which it has clearly not asked Chornovol to comment on, and then ends this ‘background information’ by noting that Chornovol was an activist of UNA-UNSO, “a nationalist organization which was one of the members of Right Sector.

At this moment they report that the criminal case on the “December attack on Chornovol has already been reclassified under a more serious article – attempted murder”.

An unnamed Russian interior ministry employee is cited as saying that the extradition agreement between Ukraine and Russia is still in force.  If, of course, it concerns ‘ordinary criminals’.  “In the case of Zinchenko there is clearly a lot of politics. When this became clear, the investigators decided to release him”.

Vasilyev also asserts that there is a political component to the case. Zinchenko has now been given temporary asylum meaning that extradition is not possible.

Lest this leave a lasting impression on the reader, Izvestia ends by stating that there are now around 2 million Ukrainian nationals in Russia, including around 600 thousand who have come from the south-eastern oblasts. There are around 36 thousand people in temporary accommodation organized for people arriving from Ukraine.  The Federal Migration Service press office is reported as saying that over 170 thousand Ukrainians have approached them, with two thirds of these regarding temporary asylum and accommodation.”

The order for Zinchenko’s extradition was issued under the former Prosecutor General, Viktor Pshonka and interior minister Vitaly Zakharchenko, both of whom are, together with Yanukovych, in hiding in Russia.  Any ‘political component’ would therefore be linked with them.

The investigation into the savage attack which could easily have killed Chornovol was undoubtedly flawed and Zinchenko’s claims to have been set up cannot be dismissed out of hand.

Russia is breaching a binding extradition agreement and, as is abundantly clear from the Izvestia report, the political component for this lies elsewhere.