What Russian TV won’t show about the events in OdessaCVU: Pro-Russian activists sold information about pro-Ukrainian activists in OdessaUHHRU condemns police role in Odessa tragedyDangerous silence over police role in Odessa May 2 eventsOdesa "Massacre" Propaganda vs. the FactsRussia’s New Odessa FileBad Start to Crucial Odessa May 2 TrialsManufacturing international outrage over an Odessa Massacre that never wasRussia kills at least 240 Ukrainian children, forcibly deports thousands of others ‘I saw fire arrows flying from Kherson...’‘... I sang in the basement to calm my daughter down’A brief description of the KHPG strategic litigations in the first half of 2021On the situation in prison colonies №77, №100, №25. Following the visit of the European Committee for the Prevention of Torture and Inhuman or Degrading Treatment or Punishment (CPT) from 4 to 13 August 2020 Russia’s Lie Machine Fans Flames of Odesa ‘Massacre’Application practice of Article 110 of the Criminal Code of UkraineA brief description of the KHPG strategic litigations in July–December 2020Main suspect in Odesa 2 May 2014 tragedy given high-ranking post in Russian-occupied CrimeaA brief description of the KHPG strategic litigations in January – June 2020Statement of Kharkiv Human Rights Protection Group and ADC MemorialRussia’s most toxic ‘Odesa Massacre’ lie and the help Ukraine is giving it
• Topics / Politics and human rights 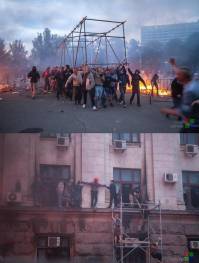 The article was posted here

Outrage at the Kremlin’s role in Ukraine’s violence is based on the evidence – and is not aimed at all Russians.

This is a response to the 31 July column on Translitions Online by Galina Stolyarova, “Outrage and Double Standards.”

The presumption of innocence is a principle binding for all, and any stereotypes or wholesale criticism of citizens of a country because of their leaders’ policies must also be shunned. To this extent I see eye to eye with the author of “Outrage and Double Standards.” On next to nothing else, unfortunately.

Galina Stolyarova decries a “dangerous polarization of opinion between Russia and the West,” which has reached a crescendo in the “rhetoric and hysteria with the apparent shoot-down of Malaysian Airlines flight MH17.”  She suggests that the “West” is fuelling” “ethnic hatred” of Russians and exercises double standards. She presents a highly contentious version of the events in Odessa on 2 May as supposed evidence of this.

A member of a team of international investigators and police examines wreckage of Malaysian Airlines flight MH17 on 1 August.

Before investigating specific claims, I would mention two problems of a more general nature. The author aligns herself, presumably as a Russian, with the stand taken by those in power in Russia, including President Vladimir Putin and the Foreign Ministry under Sergei Lavrov. The polarization of opinion she perceives, “developed during the early months of the Ukraine crisis, creating a growing gulf between Russians and many parts of the outside world.”  The Kremlin stand, including this “polarization,” is certainly echoed by all state-controlled media but can hardly be equated to the position of the Russian population. Many Russians do not support the Kremlin’s narrative with respect to events in Ukraine. There are also independent media outlets, such as Dozhd, Novaya Gazeta, and Grani.ru, that have consistently questioned the official position.

The other issue concerns basic standards of journalism that must be observed in order to achieve any real discussion.  Some serious allegations are made with little or no possibility of checking them. The author generally backs contentious assertions by referring to comments made by anonymous people on Internet sites and cites “some Russian sources” or “some Russian audiences.”  Meanwhile important details of direct relevance to her assertions are omitted.

Many Russians, she says, “compare this atmosphere to the deafening silence that greeted Russia’s repeated pleas for an international investigation of the 2 May massacre in Odessa. Dozens of pro-Russian protesters were burned alive when the building in which they had taken refuge from pro-Ukrainian gangs was set on fire.” The author does not give references to The New York Times article cited as a source for claims of monstrous behavior from Ukrainian activists “confirmed by witnesses from both sides” but appears to have used two reports from 3 May and 4 May. The later article does indeed cite witnesses on both sides but there is great reason for skepticism about that account, as anyone who has been following the events should understand.

Stolyarova ignores, for example, the 15 June report from the UN’s Human Rights Commissioner, which certainly contains criticism but paints an entirely different picture of events. There is no suggestion of an attempt to burn people alive, and Molotov cocktails are confirmed to have been thrown by both sides.  While asserting that only “Russia” has been seeking an investigation, Stolyarova does not appear to have viewed widely available video footage, which clearly shows desperate attempts by pro-Ukrainian activists to save people stranded in the building and, once the fire brigade finally arrived, to create a corridor for people to leave the building. One of the videos was provided by Sergei Dibrov, an Odessa journalist and coordinator of an independent committee made up of journalists and others to investigate the events of that day. Dibrov witnessed the events himself and was, most importantly, streaming them. There is also other footage, including a video available here. There are some eight hours of video recordings in total and these have been closely scrutinized.

Among the many details Stolyarova ignores were the disturbances earlier, which even Yury Tkachev, a journalist representing the pro-federalist side, acknowledges were likely provoked by the pro-federalists, and the reprehensible role played by the police and authorities during the day. Dibrov’s video shows attempts to rescue people at a time when the fire brigade, which is a couple of minutes away, had still not appeared.

It is regrettable that the author has, instead, opted for a version stubbornly pushed from the outset by all mainstream Russian television channels and other overt propaganda resources. A book titled Odessa Massacre has been produced and an exhibition of carefully selected footagehas been shown in Poland, Hungary, and probably many other countries. The publishers of the book, incidentally, have also produced a book called Neo-Nazis and EuroMaidan.

The author quotes media reports that are strong but not inaccurate and claims that “language like that is bent on inflaming feelings and encouraging hatred of Russians.” She condemns as precipitous comments from a U.S. official and asserts that “the U.S. Secretary of State claimed to have overwhelming evidence of Russia’s complicity in the downing of the plane, but no names or ranks of Russian officers allegedly involved were given.”

This seems at best disingenuous, especially in light of the details the author has omitted.

Within hours of the disaster the U.S. State Department informed that satellite images were consistent with a missile having been launched from an area known to be under militant control. U.S. and NATO satellites have the ability to determine the location and trajectory of any missile. They are also able to confirm that the Ukrainian military had no missile launchers in the area. Even those unwilling to believe U.S. or NATO statements should ask themselves why the Ukrainian military would have risked sending highly expensive surface-to-air missile launchers to an area under enemy control when the militants have not once used any aircraft to be shot down.

With respect to the shooting down of the plane, there is other evidence, provided by the militants themselves and Russian television.

Reports appeared on at least two VKontakte social network pages around the time of the disaster showing the images now known to have been MH17, with the militants boasting that they had downed another Ukrainian AN-26 military transport plane. The reports also appeared in the Russian media. Soon after it became clear that a passenger aircraft had been hit, not a Ukrainian military plane, the social network reports disappeared, as did any images in the Russian media showing MH17. Screenshots of the relevant images shown on LifeNews on 17 July as well as of the militants’ boasting of their new “trophy,” and earlier, of having a Buk surface-to-air missile launcher can be seen here.

Stolyarova has ignored all of this, along with the considerable video and satellite evidence of heavy artillery and large numbers of men in military trucks crossing the border into Ukraine.

Evidence that the militants downed the Malaysian airline believing it to be a Ukrainian AN-26 and that they have been heavily armed and their numbers massively supplemented by Russia is overwhelming.

The evidence, nonetheless, can do no more than point to likely culprits until a full investigation has been carried out. In this case, however, the investigation was gravely impeded at a critical time by the Kremlin-backed militants. They were reported to have sawn parts of the remains of the plane, moved pieces of wreckage, and stolen the victims’ possessions. They unquestionably caused immense distress to the bereaved by preventing the bodies from being retrieved. This was denied from the outset on Russian TV, where the militants were interviewed claiming the delay was “suspicious” but nothing to do with them. It is, however, confirmed by media reports and video footage, as well as by the team of investigators themselves.

It is impossible to write about such disrespect for the victims and their families without revulsion and anger. Stolyarova omitted these details altogether, and then claims that the heated remarks that have indeed been made are instead evidence of “racist” language and “one-sided and biased” Western coverage.

There is nothing “anti-Russian” about any of what has happened, and in fact most reports have laid the blame squarely on Vladimir Putin. There was anger in the Netherlands, where many victims were from, over reports about Putin’s daughter’s rich lifestyle in their country. Justified or not, there are still no grounds for extrapolating “ethnic hatred” of Russians.

Individual cases where a person or group of people have been abused or worse after they were learned to be Russian are possible. You can always find people who behave in unacceptable ways. There were a few such people during the fire in Odessa who were unable to put antagonism aside. One of them is told on the video here (at around three minutes) to get his head into gear: “These are people. … Games are games, but nobody wants deaths.”

Ukrainians have seen their country – and for many their or their loved ones’ lives – treated as pawns in a geopolitical game for many months. The world understood it was no game when a Malaysian Airlines plane with 298 people on board, 80 of them children, was shot down. Too many lives have been senselessly lost and the aim of sanctions must be to stop the bloodshed and destruction.

If there is any polarization, it is between those who have understood this and those who are being duped by cynical propaganda, of which ordinary Russians are also victims.