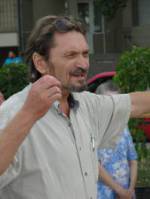 Three members of the Donetsk prayer marathon were detained by militants from the self-proclaimed Donetsk People’s Republic on Friday evening, and the two men – Pastor Alexander Khomchenko and Valery Yakubenko – were taken away in the car boot to one of the militants’ bases in Makiyivka. Yakubenko was accused of not working for the good of the ‘DPR’ and of supporting ‘enemy sects’, but was later released.  Khomchenko stands ‘accused’ of being the pastor of a protestant church which for the militants means that he’s an enemy and spy.  He was badly beaten and has been given 5 days compulsory labour.

Pastor Sergey Kosyak writes that the information has been passed to those who may be able to help in getting the pastor released.  He also warns that judging from the statements made by the militants they particularly have it in for him and friendship with him can thus prove dangerous.

Yevgeny Frantsuk, a volunteer driver working with Pastor Kosyak and others to evacuate people to safety is still being held captive by the militants.  As reported he was abducted on Aug 3 in Shakhtyorsk while trying to evacuate a patient from the hospital on Filatov St.