Without Double StandardsWhat Russian TV won’t show about the events in OdessaCVU: Pro-Russian activists sold information about pro-Ukrainian activists in OdessaUHHRU condemns police role in Odessa tragedyOdesa "Massacre" Propaganda vs. the FactsRussia’s New Odessa FileBad Start to Crucial Odessa May 2 TrialsManufacturing international outrage over an Odessa Massacre that never wasRussia is waging a bloody war against Ukrainian childrenRussia kills at least 240 Ukrainian children, forcibly deports thousands of others ‘I saw fire arrows flying from Kherson...’‘... I sang in the basement to calm my daughter down’A brief description of the KHPG strategic litigations in the first half of 2021On the situation in prison colonies №77, №100, №25. Following the visit of the European Committee for the Prevention of Torture and Inhuman or Degrading Treatment or Punishment (CPT) from 4 to 13 August 2020 Russia’s Lie Machine Fans Flames of Odesa ‘Massacre’Application practice of Article 110 of the Criminal Code of UkraineA brief description of the KHPG strategic litigations in July–December 2020Main suspect in Odesa 2 May 2014 tragedy given high-ranking post in Russian-occupied CrimeaA brief description of the KHPG strategic litigations in January – June 2020Statement of Kharkiv Human Rights Protection Group and ADC Memorial
• Topics / Law enforcement agencies

Dangerous silence over police role in Odessa May 2 events 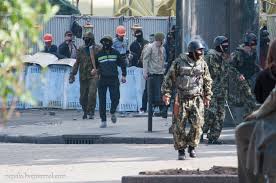 Please see also The Odessa “Massacre”: Propaganda vs. the Facts

There are many ways to lose the information war.  Inaction is one, especially when information, and even video footage are widely available which demonstrate the failure by police management and the emergency services to avert casualties during the clashes and fire on May 2.

Any uncertainty only helps the Russian media to push their ‘fascist massacre’ narrative.  It also fuels bitterness and division in Odessa and is profoundly unfair to the many police officers who did fulfil their duties on May 2.

Frustration over “lack of cooperation” from both the Interior Ministry and SBU [Security Service] has been expressed by the UN Monitoring Mission [HRMMU].  Three months after the tragic events in which 48 people died, this frustration is shared by many.  The May 2 Group, made up of Odessa journalists, former police officers and others, which has been carrying out its own independent investigation gave a press conference on Aug 8 at which it made a direct challenge to particular former high-ranking officials.  They invited them to explain their actions at a public interview.

There are indeed questions to be answered.  The first days in May, leading up to Victory Day on May 9, were tense throughout Ukraine following Russia’s occupation of the Crimea and widely assumed role in the troubles in eastern Ukraine.  The SBU and Interior Ministry had informed of likely disturbances and provocation in both eastern and southern oblasts from May 1 to 10.  The Odessa regional police were also fully aware of planned actions prior to a football match between Chernomorets and Metallist on May 2.

The May 2 Group stresses that the social networks were full of information on the one hand about the planned March for Ukrainian Unity, with the route clearly outlined; on the other – pro-federalism activists’ plans to obstruct the march.  The Group notes that reserves had been prepared by the Odessa regional police, yet for reasons that remain unclear, were not deployed.   The number of police was woefully insufficient, nor were they equipped to deal with mob violence.

It is critical to understand what happened earlier in the day, and why the Action Plan [named Khvylya or in Russian, Volna – ‘Wave’] was signed, but then not registered, and not carried out.  If the confrontation during the afternoon had been brought under control, the fire which claimed the lives of 42 people would not have happened.

Petro Lutsyuk, former Odessa Regional Head of Police, is known to have signed the relevant action plan which would have deployed more forces and given them the authority to use means to control disturbances.  This document needed to be registered in a log book and the interior minister informed to become valid.  Since the document was never registered, the May 2 Group believes that at that crucial moment a phone call may have been received or some part of the police management may have decided to flout the order.

The list includes one other person but he warrants separate attention.  Dmytro Fuchedzhy, ex-deputy head of the Odessa police, disappeared after the tragedy and was placed on the wanted list.  He appeared on Russian TV, seemingly from Transnistria, on May 22, and ever since has been lavishly providing interviews in which he denies any guilt himself and claims that the events were planned in advance and by people high up to get rid of the anti-Maidan protesters. It should be noted that even Russia’s Pyervy Kanal is cautious in its presentation of Fuchedzhy.  Understandably since the video footage, witness testimony from journalists present and many others are damning.

The May 2 Group gives one example.  At 17.55 Fuchedzhy received a slight injury to his hand, but the ambulance doctor insisted that he needed to be evacuated. There is video footage from two sources.  The one below is from Serhiy Dibrov, coordinator of the Group who streamed some 7 hours of footage through the afternoon and evening in his capacity as journalists for Dumskaya.net.  Dibrov’s footage shows a man opening the door, apparently for Fuchedzhy, but then quickly closing it as the camera appears.  Dibrov explained at the press conference why he is in no doubt that the man inside was Vitaly Budko, a pro-federalist known as ‘Botsman’ who is clearly visible in other footage shooting at pro-unity activists. A second video from another source shows Fuchedzhy obviously recognizing and nodding to a person in the ambulance before getting in.  A police officer who has been wounded and is in intense pain is being supported on his feet by two colleagues, but the ambulance does not take him.

The Group is aware of agreements reached between Fuchedzhy and at least one pro-federalist organization [Pravoslavnoe Kazachestvo – organization of Orthodox Cossacks].  They were supposed to help the police in maintaining order.  As Yury Mukan, former police colonel and member of the group suggests, the activists may have understood this in their own specific way.

Other footage aroused outrage from the outset, and makes any attempt by Fuchedzhy to help Botsman get away particularly shocking.

At around 16.30 approximately 30 police officers with shields formed a cordon on Derybasovska St.  Pro-federalist activists used them as a shield to throw things at pro-unity activists, and to shoot at them, including from a machine gun.  There was no attempt to detain them, or even to stop such activity.

There are several episodes on the videos below where it is quite clear that the pro-federalists were using police shields as cover and shooting from behind them. One of those shooting has been identified as Botsman.

The May 2 Group has no grounds for believing that the police as a whole were involved in any plot.  They also stress that many police officers behaved properly, and that a lot of these same officers are now honourably fulfilling their duty as part of the anti-terrorist operation in Donbas.

This does not mean, however, that individual officers, including some high-ranking officials, did not have some kind of arrangement with one side to the conflict.

There are an enormous number of questions.  Why, for example, were the police inert in the evening when enraged pro-unity activists stormed the side of the building and also attacked some pro-federalists who had escaped?  The answer, given to HRMMU, that they were awaiting orders is obviously unsustainable.  If, on the other hand, they received orders to not take any measures, this does not make their behaviour any more justifiable, while raising serious questions as to who issued such orders and why.

It is clear that the fire brigade was called multiple times from 19.30.  It arrived more than 40 minutes later though it was located very close by.  HRMMU were told that this was because the police did not create a safe and secure perimeter to allow the fire engines to get to the building. This arouses serious scepticism since there is no evidence that the fire brigade even tried to turn up.  Pro-unity activists can be seen desperately trying to save people stuck on the third floor in the video here (from around 11.0, onwards), despite the Molotov cocktail cocktails hurled and shots fired by some pro-federalist activists from the roof or inside the Trade Union building.

48 people died in the clashes earlier, or in the fire.  The fatalities earlier were almost certainly triggered by the behaviour of one group within the pro-federalist camp who actively tried to cause trouble, attacking a peaceful demonstration.  There was ample time to have created a proper police cordon on Kulikovo Pole and prevent the confrontation from spreading there and this did not happen.  In the material here, information is provided about the strong grounds for believing that the barricading of the Trade Union building was planned well in advance, and that a large number of people were effectively tricked into being in the building.

None of this is suggesting that the terrible tragedy was planned.  The May 2 Group is inclined to think that while some activists consciously encouraged confrontation and violence, neither side envisaged the disturbances as leading to fatalities.  All the factors which proved so fatal were, however, set in place and these included the disastrous delay of the fire brigade in responding and the inaction, sometimes worse, of police officer.  The questions must be answered.