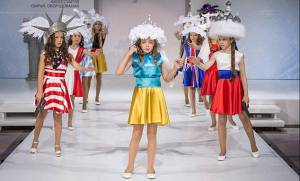 A Russian children’s television channel «Улыбка ребёнка» [smile.tv] has broadcast a cartoon in which children’s pictures supposedly show how the Ukrainian army is bombing Donbas.

The cartoon clip claims to have been created by children from Donbas, ‘helped’ by artist Alexei Balashov, who fled from the fighting in eastern Ukraine to Russia.  The cartoon, which asserts to be “made by children for adults”, is conveniently available on YouTube and just happens to have subtitles in English:  https://youtube.com/watch?v=MshQF4g2Lm4#t=107

A little boy, for example, is supposed to have surmised that “the pilot probably saw it as a computer game”.

The images go from ordinary children’s paintings with mothers holding babies, children playing to scenes where bombs are falling, with this reflected in the children’s drawings.   In response to the remark about the pilot, a young girl is heard saying: “But we saw it differently….. We had to flee from our homes to Russia”.   The English translator probably felt this to be somewhat lacking in pathos and made it “and looked for shelter in Russia”.

Should anybody have missed the point, it is printed on the screen: “Save Donbas people from Ukrainian aggression”.

Attempts to find out from Balashov why there is no mention in the film of armed militants were unsuccessful.  The children now in Russia will almost certainly have seen masked militants with machine guns, stopping cars and pedestrians.  They may well have seen them seizing hostages or even know people who are being held prisoner.

Over recent months the militants have on several occasions abducted orphans from children’s homes and tried to take them across the border into Russia.  On each of these occasions, buses were seized by armed men.  The same militants refused to allow children with serious medical conditions to be evacuated from areas where their lives were in danger, presumably in order to be able to use them as hostages.

In Kramatorsk several mothers were concerned about the effect the militants’ presence was having on their children. They surrounded a van filled with armed men and courageously held their ground, insisting that the militants leave their street, stop frightening their children and using them and their mothers as living shields.   Two women were forced to go into hiding after the militants returned to get even.

It is unfortunately almost inevitable that children’s pictures will be profoundly affected by the violence around them.  For this very reason it is inconceivable that masked men with machine guns were not drawn.

In fact, it is quite likely that the children will also have witnessed Russian tanks, armoured personnel carriers or even the Buk surface to air missile carrier which was probably used by Kremlin-backed militants on July 17 when they shot down MH17, believing it to be a Ukrainian military transport plane.   This was also omitted so as not to spoil the storyline.

Former KGB officer Vladimir Putin and his people probably recall the use made of children by the Soviet propaganda machine.  However children’s voices singing “may there always be sunshine”  are nothing when compared with more recent abuse of children for propaganda purposes.

A Moscow fashion show features girls aged from 10 to 12 dressed in countries’ flags.  The girl dressed in Ukrainian colours points a gun at herself and is prevented from pulling the trigger by models from Russia and the USA.  In another scene, she apparently turns the (toy) gun on the audience, and then on Russia and the USA.  Those with the stomach for it can see photos and even the entire performance here.

This staggeringly tasteless propaganda was supposedly designed by a ten-year old.   Even if it was, she not only got the idea from those around her and / or the Russian media, but was not encouraged to find a better way of demonstrating anti-war sentiments.

Moscow, for example, could demonstrate real concern for victims of the violence by not encouraging militants to abduct children at gunpoint and bring them into Russia as propaganda ’trophies’.  By stopping the nightly supplies of arms, heavy technology and men across the border to fight the Kremlin’s dirty war, and by understanding once and for all that children should not be ‘used’ for geopolitical or any other games.