Shenderovich: “The war against Ukraine is a disgrace and a crime” 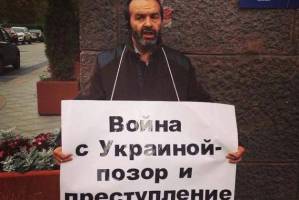 There seem to have been a few other single person pickets on the same main street (Tverskaya) in Moscow.

Meanwhile OVD.info reports that the police detained six people who lit candles in protest.  The six were released later in the evening.