Truth about Beslan blockedBeslanBeslan: Eight years on, still no answersMothers of Beslan seek answers through StrasbourgBeslan: Russia finally forced to answer before the European Court of Human RightsCourt in Strasbourg accepts case against Russia over BeslanBeslan: 11 years without answersBeslan: No Answers, Only Prosecution of Slain Victims’ Mothers Who Dared to ProtestRussia found in violation of the right to life over Beslan School attack14 years of pain and of lies about the siege and storming of School No. 1 in BeslanBeslan: In Memory and MourningBeslan Six years on100 lessons on BeslanRemembering BeslanOn the Fifth anniversary of BeslanFamilies of BeslanBeslan: four years and no answersCriminal investigation initiated against members of “Voice of Beslan”“Voice of Beslan” will not be silenced«Voice of Beslan: Only the truth»
• Topics / News from the CIS countries 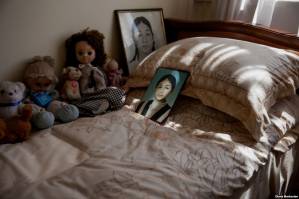 10 years have passed since the seizure by terrorists of a school in Beslan, North Ossetia.  10 years in which the Russian authorities have avoided serious questions about the explosion used to justify the storming of the school two days later with the use of tanks and heavy artillery.  331 people were killed, over half of them children.

“Time has stood still in Oksana Kokova’s bedroom. Her father, Ruslan, likes to keep her door open. Oksana managed to escape after the explosions on the third day, but she returned to the school to help the younger children flee. She was killed in the process. Oksana was talented at sports, and loved karate and knitting. Living alone with her father and older brother, she had become accustomed to taking care of the house. She was friendly and talkative; she liked to take charge. Oksana was 15 years old. “