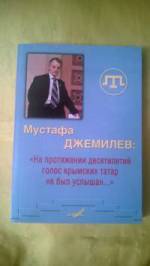 Refat Chubarov, head of the Mejlis of the Crimean Tatar People, reports that in August raids were carried out by Russian FSB [security service] officers of bookshops in the Crimea.  Without any warrant or other documents justifying the move, books which they deemed contained things citizens should not read were removed.

Among the books they objected to was the book by veteran Crimean Tatar leader Mustafa Dzhemiliev – “For decades Crimean Tatars’ voices were not heard”, published in Kyiv in 2014.

The book is about Dzhemiliev’s civic, human rights and political activities and contains material about  his trials in Soviet times.  The documents demonstrate the situation for the Crimean Tatar movement as a whole, and of Dzhemiliev’s role in this. The book contains memoires by such outstanding defenders of human rights as Petro Grigorenko and Andrei Sakharov, as well as Dzhemeliev’s last words at the Omsk trial in 1976 in which he exposed the criminal nature of a regime that subjects entire ethnic groups to repression.

The book also includes Mustafa Dzhemiliev’ EuroMaidan address and his speak at a closed session of the UN Security Council on March 31 2014.

Mustafa Dzhemiliev, who is also a Ukrainian MP, was banned from entering his homeland by the Russian authorities in April.  Refat Chubarov was presented with a similar ban on July 5.