Wrapped in a Ukrainian flag, Irina Dovgan is forced to stand at a Donetsk intersection with a sign identifying her as a spy and reading: "She kills our children."    A woman berates and then kicks Dovgan as a man holding a rifle looks on. 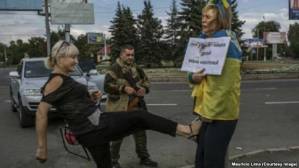 Images of the scene that unfolded in eastern Ukraine in August sparked outrage and concern for the initially unidentified woman. Dovgan’s name was eventually revealed and her story told, including to RFE/RL’s Russian Service in an exclusive interview.

She was detained by pro-Russian separatists in Donetsk on August 24, accused of spying for Ukrainian forces. As Dovgan explains, "the photos were only a small part of that horrible day."

In the interview, she says she prayed for death as passers-by slapped her, spat at her, and called her a "fascist."

"Many young women would hit me in the face, on the head and ears. One photo cannot show all of that, " Dovgan told RFE/RL’s Russian Service.

Dovgan recalls a "woman who took her time to take tomatoes from the trunk of her car" in order to hurl them at her. The woman then squashed two tomatoes onto her face, causing tomato juice to run into her eyes.

"But the most horrible part was when people would come to just watch. Nicely-dressed young men would stop their cars and pose for photos with me in the background."

Dovgan’s public humiliation at a busy intersection in downtown Donetsk was orchestrated by pro-Russian separatists, who accused her of serving as a spotter for Ukrainian artillery.

Dovgan, 52, who ran a beauty salon in Yasinovataya, a town outside Donetsk, insists she never acted as a spy.

But she freely admits to being a volunteer who collected donations -- food, clothes, medications, and money -- from locals and delivered them to Ukrainian soldiers stationed nearby.

Dovgan says she wasn’t the only one in Donetsk who wanted to help Ukrainian soldiers.

"There were many people who supported me. They would bring money, blankets, some people would bring sleeping bags, so we received supplies all the time."

Dovgan says she was aware of the dangers involved when she -- along with a female friend -- drove to the area where the Ukrainian soldiers were stationed.

​​Dovgan says she made a fateful mistake when decided to take photos of soldiers receiving the collections to show them to people who donated the supplies.

"Those photos later become key evidence against me, " says Dovgan, after her tablet was "somehow discovered" by the rebels.

She was taken from her house in Yasinovataya by separatists from the Vostok battalion.

Dovgan says she was interrogated at the battalion’s base and that she refused to give up the names of people who helped with donations.

Then Dovgan was handed over to a group of some 20 men she believes were from North Ossetia.

"They started to seriously torture me, " Dovgan recalls."It was total abuse. One of them shot pistols next to my ears many times, so I nearly lost my hearing."

Another called her a fascist and forced her to shout "Sieg Heil."

Dovgan says she was terrified when the rebels threatened to gang-rape her.

Dovgan said she crawled on the floor and begged them to kill her.

She recalls that, later that evening, they brought in a man accused of attempting to abuse a child.

Dovgan says the man was tortured and possibly raped in the next room. She could hear him screaming.

Dovgan was freed on August 28 after two foreign journalists pleaded with Vostok battalion leader Aleksandr Khodakovsky to release her.

Khodakovsky ordered Dovgan freed, and vowed to discipline those responsible for her detention and public humiliation.

Dovgan, however, believes they will never be punished.

She has since left Donetsk and joined her husband and two children in Mariupol, a town controlled by Ukrainian forces.

Dovgan says the family will not be able to return in the foreseeable to their home in Yasinovataya which was looted while she was in detention.

She managed to retrieve some clothes, her car, and -- most importantly, she says -- her dog and two cats.

The family is now looking to rebuild their lives in Mariupol. But they are not expecting any financial assistance from the Ukrainian government.

"We have some money in a savings account, we have two cars, one very old but it still works, " Dovgan says.

"We will work. Besides, what kind of help you expect from the government when the country is facing so many problems. We absolutely don’t need anything. We will manage."