The Russian Invasion and Deaths Putin didn’t mentionRussian NGO has list of 400 killed or wounded Russian soldiersIf Russia is not at war, then who is in those freshly-dug graves?Macabre Convoy: Cargo 200 from Ukraine to RussiaInvasion by any other nameHalf-empty or half-emptied?Poland knows about Russian ‘humanitarian convoys’. It didn’t let one in.Stand up to Putin: buy Polish apples!No Sanctions Game Changer?Will the West sleep through this final wake-up call?Russian LifeNews inadvertently told the truth about downed Malaysian airlineMilitants accused of deliberately shooting at Severodonetsk residential areaSent to be shotThe EU’s Opaque Dealings with UkraineWhose anti-Semitic and Homophobic Choice?What should they talk about, Mr Putin?The Peace that chokes RussiaEU’s Clear and Consistent Capitulation?Russian tanks and Ukrainian orphans in Moscow’s unabated offensiveCheck your sources, Mr Lavrov
• Topics / Politics and human rights 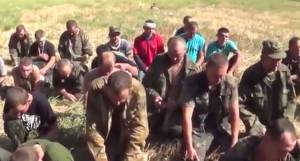 Among those taken prisoner by the Russian military near Ilovaisk [Donetsk oblast] is a TV Espreso journalist who on Aug 28 was able to interview two Russian paratroopers caught by the Ukrainian army.  The soldiers explained that they had been told they were going on exercises.  They were taken in column at night first to somewhere near the Ukraine – Russian border and then into Ukraine.  Asked by TV Espreso’s Yehor Vorobyov when they realized that they weren’t on a training exercise,  Ruslan Akhmetov and Arseny Ilmigov answered: “When we came under fire”.

The interview was reported when Ukrainian soldiers, and some journalists covering the events, came under siege in a major offensive believed to be by Russian forces.  It was on a day when the west finally acknowledged what had long been clear, namely, Russia’s direct military engagement in Ukraine.  The deployment of Russian soldiers, Russian tanks and sophisticated military equipment has been vehemently denied ever since by Russia’s leadership, as have the deaths and injuries of many Russian soldiers, including a lot of conscripts forced to sign contracts to go to Ukraine.

In the early hours of Aug 29 an ‘Appeal to the insurgents of Novorossiya’ appeared on Russian President Vladimir Putin’s official website.  This called on “the insurgents” to create a humanitarian corridor for Ukrainian soldiers surrounded, and allow them to “be reunited with their families, return them to their mothers, wives and children”.

Whether or not one believes that those suddenly demonstrating military strength not seen for many weeks were indeed ‘insurgents’ , Putin’s call was apparently heeded and a promise given not to shoot on Ukrainian soldiers as they left the area under siege.  The promise was broken immediately and a large number of Ukrainian soldiers (reports range from a hundred to several hundred men) are reported to have been shot dead with many badly injured.  According to Liga news, several hundred soldiers were taken prisoner and handed over to local Kremlin-backed militants.  Some the Ukrainian army managed to free.

The publication asks who is to blame for the worst military disaster so far and says that the surviving soldiers are unanimous in naming the command of the so-called anti-terrorist operation [ATO].  They accuse the military command of negligence and ill-thought-out actions which led to more than 5 thousand Ukrainian soldiers, according to preliminary estimates, being placed at risk.

Journalist Yury Butusov believes that several Russian units were responsible for shooting the Ukrainian soldiers and says that some of the Ukrainians captured have been taken to Russian territory.

Attempts are currently underway to apportion – or shift – blame and some lessons must urgently be learned.

In Russia TV Dozhd has reported soldiers’ mothers saying that they had believed Putin, yet now find that their sons have been forced to fight Russia’s illicit war in Ukraine.

In Ukraine – that Putin’s calls to shun bloodshed and promises from those fighting his war cannot be trusted.

A lesson learned at a terrible cost.