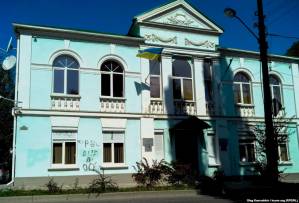 In the early hours of Sep 1 the premises of the Mejlis of the Crimean Tatar People in Simferopol were daubed with obscene signs.  According to Dilyaver Akiyev, head of the Mejlis Secretariat, the concierge saw somebody kicking the front door at around 2 a.m. and then run away.  When she walked around the building she found obscene language daubed on the walls of the building, as well as something that looks like a target (for aiming at).

The police and FSB [Russian security service] were immediately notified.  Akiyev however is not hopeful about any investigation saying that several months after the building was daubed in red paint nobody has been charged.

There have been a small number of dissenting voices in the Mejlis who decided to stand for election in the coming elections, however the Mejlis as a whole agreed that in view of the widespread rights violations seen under the occupation regime, they had no choice but to reject any cooperation.

The Mejlis statement concludes by reiterating the decision first taken on June 12:

“It will not put forth candidates recommended by bodies of self-government for election to the Crimean parliament and municipal authorities.

It calls on all Crimeans, regardless of their nationalities, who consider that by violating the basic rights of the Crimean Tatars who are the indigenous people of the Crimea, discriminatory electoral laws will not foster the strengthening of inter-ethnic harmony; the establishment of equal dialogue and social justice in Crimea to not take part in the Sept 14 elections. “

Information about the vandalism and photo from Krym. Realii.