Remember BeslanTruth about Beslan blockedBeslanBeslan: Eight years on, still no answersBeslan: Russia finally forced to answer before the European Court of Human RightsCourt in Strasbourg accepts case against Russia over BeslanBeslan: 11 years without answersBeslan: No Answers, Only Prosecution of Slain Victims’ Mothers Who Dared to ProtestRussia found in violation of the right to life over Beslan School attack14 years of pain and of lies about the siege and storming of School No. 1 in BeslanBeslan: In Memory and MourningBeslan Six years on100 lessons on BeslanRemembering BeslanOn the Fifth anniversary of BeslanFamilies of BeslanBeslan: four years and no answersCriminal investigation initiated against members of “Voice of Beslan”“Voice of Beslan” will not be silenced«Voice of Beslan: Only the truth»
• Topics / News from the CIS countries 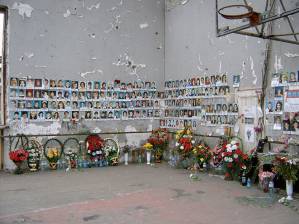 Exactly 10 years ago, just after 1 p.m. Moscow time, Russian federal troops stormed School No. 1 in Beslan where over 1100 children, teachers, parents and grandparents of children had been held hostage since the morning of Sep 1.  334 people died, including 186 children.

The storming of the building began after explosions were heard.  A large number of the casualties were due to 3 explosions and the resulting fire.  Others were shot trying to escape from the building.

The authorities have always claimed that the explosions came from within the building.  Explosives expert Yury Saveliev, however, believes that they were caused by grenades thrown from outside the building, and prepared a 700 page report explaining his findings which in other aspects also differ radically from the official version.

A public hearing by the European Court of Human Rights is due on Oct 14 into the application brought by the NGO Mothers of Beslan.  They accuse the government of disproportionate use of force leading to the deaths in the gymnasium as well as because of the authorities’ failure to negotiate with the terrorists.  They assert also that the authorities did not have an adequate plan for the treatment and medical care of victims and complain of the lack of an effective investigation into the events.

Hostages who survived or their families found that their testimony was totally changed, and to this day the authorities have failed to answer a number of crucial questions., including why flamethrowers and tanks were used in a situation where 1100 people, many of them children, were held hostage.  The court in Strasbourg may not consider the question, but many have asked since 2004 who was responsible for the poisoning in an Aeroflot plane of fearless journalist Anna Politkovskaya.  She had headed to North Ossetia to negotiate with the terrorists, but ended up in hospital.  Politkovskaya, more than just about anybody, would have had a good chance of achieving a peaceful solution.