Crimean children prevented from studying in their native language 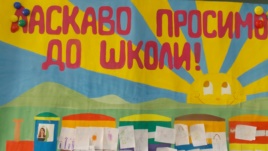 Welcome to our school! (in Ukrainian)

Only the Ukrainian lyceum in Simferopol is providing a first grade class with all teaching in the Ukrainian language.  Children will, however, be forced to change to Russian in the two final years of school placing them at a severe disadvantage when taking vital school-leaving exams.

Natalya Goncharova, Crimean education minister announced earlier that there would be no other first-grade Ukrainian classes, supposedly before there had been no applications from parents.  In May she stated, however, that 328 such applications had been received.   It was also announced then that teachers of Ukrainian language and literature would be retrained as teachers of Russian.

Even before its military intervention this year and the annexation of the Crimea, Moscow had persistently claimed that ethnic Russians were discriminated against in Ukraine, often citing language as an area where their rights were supposedly violated.  No such discrimination was found by the European Charter of Regional or Minority Languages.

The claims were especially untenable in the Crimea where Russia has always been the main language of communication and where only 5 schools offered Ukrainian language tuition against 500 Russian-language schools.

That number has now diminished to the first nine grades in the Ukrainian Lyceum in Simferopol.  Instead of 40 classes previously available at the lyceum teaching in Ukraine, there are now only 9.  This school is due to be renamed by the end of the year according to the new head, Valentina Lavrik, appointed after Natalya Rudenko was forced out.

Radio Svoboda spoke with two parents who want their children to study in Ukrainian.  One of them, Roman said that he had not known that the last two years must be in Russia and is outraged.  Changing totally, he says, is extremely difficult and wrong.

Andriy Shchekun, a Ukrainian civic activist who now works with displaced people told Radio Svoboda that the occupation regime is carrying out a deliberate campaign to destroy Ukrainian language education in the Crimea.  They resort to more subtle means than the outride ban imposed in Tsarist times, however the aim is the same.

Shchekun insists that preventing Crimean children from studying in their native language during the last years of school is discrimination.

Lavrik said that at each level groups of children would be formed for learning Crimean Tatar.  On average two hours would be allocated for this a week.   It is likely that school hours (45 minutes) are meant.

Anybody who has tried learning a language should understand how entirely symbolic any language studies with only 90 (or 120) minutes a week are.  By forcing students to change languages for the critical years of their studies, the authorities are effectively ensuring that most parents will decide against sending their children to Ukrainian-language or Crimean Tatar language schools.