Russian NGO branded as “foreign agent” after reporting on Russian military action in UkraineRussian NGO has list of 400 killed or wounded Russian soldiersIf Russia is not at war, then who is in those freshly-dug graves?Macabre Convoy: Cargo 200 from Ukraine to RussiaInvasion by any other nameHalf-empty or half-emptied?Poland knows about Russian ‘humanitarian convoys’. It didn’t let one in.Stand up to Putin: buy Polish apples!No Sanctions Game Changer?Will the West sleep through this final wake-up call?Russian LifeNews inadvertently told the truth about downed Malaysian airlineMilitants accused of deliberately shooting at Severodonetsk residential areaSent to be shotThe EU’s Opaque Dealings with UkraineWhose anti-Semitic and Homophobic Choice?What should they talk about, Mr Putin?The Peace that chokes RussiaEU’s Clear and Consistent Capitulation?Russian tanks and Ukrainian orphans in Moscow’s unabated offensiveCheck your sources, Mr Lavrov
• Topics / News from the CIS countries 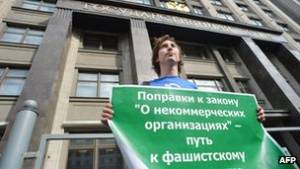 A new draft law is planned in Russia which would prevent NGOs labelled as ‘foreign agents’ from using any money received through foreign grants to pay salaries.  Izvestia reports that according to the proposed amendments, all grants would have to be spent on the aims of the NGO as set out in their founding documents, with any staff working totally as volunteers.

There are already restrictions on how much money (20%) can be spent on administrative costs, these including salaries.  A new blanket ban would, like the original move to label civic organizations ‘foreign agents’ for receiving money from abroad, encourage public prejudice against NGOs and those working for them.  The State Duma deputy proposing the new move, Yevgeny Fyodorov says himself that he was involved in the law on ‘foreign agents’.

“We saw that Americans use foreign agents and the media which do not so much provide coverage of events, but engage in propaganda, becoming participants in the process. If a person really wants to help ‘hamsters’ or ‘tigers’ and is in an organization for that purpose, he needs to be distinguished from somebody who in this organization receives money, and whose real activities are directed at serving and organizing street riots.  Thus work in a foreign agent non-commercial organization will essentially become a hobby and the participants of such organizations will be advised to seek employment in other areas of activity.”

The register of so-called ‘foreign agents’ run by Russia’s justice ministry presently contains 13 organizations, including the election watchdog Golos, the Agora Association of Human Rights Organizations, the Memorial Human Rights Centre and, as of Aug 29, the Committee of Soldiers’ Mothers of St Petersburg.

The latter NGO was added to the list at the end of a week when it had been active in trying to establish the whereabouts and / or circumstances and place of death of soldiers believed to have been sent to Ukraine.  its inclusion in the list of foreign agents was widely assumed to be linked to that work.

Fyodorov is at very least disingenuous.  While protecting hamsters may be something you do in your free time, the vital work carried out by such organizations like Memorial involve legal aid, serious investigations into rights abuse, other forms of entirely legal and time-consuming activity.  There are few people in any country who can afford to devote all their time to such activities if the work is not also their source of income.

The current campaign against non-commercial organizations in Russia has been continuing for some three years now, with the original law introducing the idea of ‘foreign agent’ passed on July 13 2012.  According to this law, a non-commercial organization is labelled a foreign agent if it engages in the extremely broad definition of ‘political activity’ and receives financial support from foreign sponsors.

Similar moves were first proposed in Ukraine within a year of Viktor Yanukovych becoming president, and accompanied by clear efforts to convince the public that civic organizations were some kind of fifth column in the country.

One of the draconian anti-protest laws ‘adopted’ on Jan 16 2014 by the then ruling majority brought in measures that were, if anything, slightly worse than those in Russia.  It was these laws which led to the first violent protest in the EuroMaidan movement with some activists rightly fearing that if they did not protest now, they would all shortly be in prison.

In Ukraine, the laws were revoked on Jan 28.  In Russia, they unfortunately remain a potent weapon against civic society.