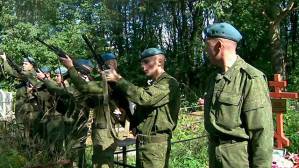 Kremlin-controlled TV channels have finally reported the deaths of Russian soldiers in Ukraine but have typically claimed that these were individual soldiers who ‘took leave’ to go and fight.  This corresponds to the line taken by the Kremlin, but clashes with mounting evidence that Russian soldiers, including conscripts, are being forced to fight in Ukraine.  Many have already returned in sealed coffins.

On Thursday both Pyervy Kanal and NTV broadcast a report from the burial in Kostroma of 28-year-old Anatoly Travkin, a soldier of the No. 98 airborne paratrooper division based there.

Pyervy Kanal reports that Travkin “set off for Donbas about a month ago and died in battle. He did not inform either his wife whom he had married shortly before his departure nor the command of the unit in which he served of his decision. Officially he took leave”.  He was buried with military honours.

This is followed by the words of veteran Mikhail Kozlov who expresses sorrow at the loss of young people, but pride “that in our provincial Russian cities there are lads who are not indifferent to what is happening in our world. And at the call of their soul, at the call of their heart, do what they must do”.

It is possible this veteran paratrooper was simply unnerved by the microphone, but he certainly gives the impression of somebody reading his lines.  In a performance code-named ‘damage maintenance’.   There have, after all, been very many reports from soldiers’ mothers NGOs and independent media suggesting that contract soldiers or conscripts are not being left to heed “the call of their heart” but are being forced to sign contracts ‘agreeing’ to go to Ukraine.  Cases have been cited in different parts of the country where young men have been told that if they don’t sign, the commander will sign for them.

Quite possibly to move away from the present, Pyervy Kanal showed a memorial service for Sergei Zhdanovich whose death was widely reported in the Ukrainian media shortly after Kremlin-backed militants, together with members of the Russian Vostok battalion, tried to seize Donetsk airport on May 26.  The channel mentions that Zhdanovich had wanted to serve in the armed forces even before he was old enough, and mentions in its list of activities that he had worked as a special forces [spetsnaz] instructor.  It fails to mention that he is believed to have been an FSB [security service] military instructor, only nominally retired.  Instead his widow is left to stress the key points: Zhdanovich also “could not be stopped” because he “did what any real man must do”.

Zhdanovich was one of an unidentified, but large number of casualties, and his name was on a list of bodies returned to Russia in a first, widely publicized ‘Cargo 200’.  It seemed curious at the time that the militants were so intent on having Russian journalists view the procedure at the morgue and later at the border.  It was, however, clear that the 31 coffins in no way corresponded to the actual number of deaths.

Kremlin-loyal channels are going all out to push the idea that Russians, including some soldiers ‘on leave’, are in Ukraine as volunteers fighting a fascist regime, etc.  On Thursday the Russian service of Russia Today ran a story: “Russian and foreign volunteers in Donbas: We have come to defend the world from fascism”.

The Russian volunteers tell RT that they came mainly “to stop the spread of fascism”.  Their gear and everything except arms and ammunition they claim to have bought with their own money.  They speak with a volunteer who, in his words, is defending Donbas not only from fascism, but from looters, drug addiction. He is, in short, engaged in “maintaining order in the city”.

The volunteers all say that they were prompted by the events in Odessa on May 2 which one of them describes as when “people were burned alive”.

A major propaganda campaign has been waged in both Russia and beyond about the events on May 2. The version presented is provably false, however with the relentless barrage of lies, it is quite likely that the young men, and others, have been duped.

RT also speaks with two French men “appalled at how Russia is presented as an aggressor”.  One explains:  “We want to show that Russia did not attack Ukraine.  It was Kyiv officials who did that, brought to power by NATO and the EU.”

NTV, on the other hand, has a lot to say about mercenaries.  The ‘insurgents’ are reported to have besieged Donetsk airport from which Ukrainian forces are still supposed to have managed to shell civilians.  According to the insurgents’ ‘intelligence’, most of the men in the airport are mercenaries, with English and Polish heard.  For good measure, there is even reported to be an American tank on the runway.

The message from all pro-Kremlin media has clearly been synchronized.  It remains unclear how much such efforts will help when funerals have been taking place throughout Russia of young men whose families thought they were on training exercises.  When parents are desperately trying to contact their sons, or being told by the latter that they are being forced to sign documents allowing them to be sent to kill, and perhaps, to die in Ukraine.

It has become dangerous to say this aloud with a number of journalists attacked for trying to find out what happened to an entire airborne paratrooper regiment from Pskov, most of whom are believed to have been killed in Donbas.  The particularly savage attack on Lev Schlosberg came just days after he revealed the authorities’ deception over the deaths of two of the paratroopers.

One of the NGOs most active in trying to get to and reveal the truth – the Committee of Soldiers’ Mothers of St Petersburg found itself added to the list of ‘foreign agents’ on Aug 29.  A legislative initiative, moreover, has just been announced to prevent  people working for non-commercial organizations deemed to be ‘foreign agents’, i.e. receiving grants from abroad, to use any of the NGO’s income on salaries.

Repressive measures against people protesting at Russian aggression in Ukraine have been gaining momentum and are likely to get worse as people understand how monstrously they have been deceived.  There will be no let-up either in propaganda, as the latest highly doctored dose of truth by the Kremlin-controlled media have demonstrated.