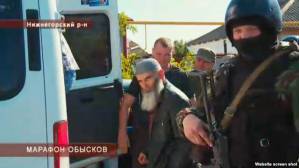 In the latest hunt for non-existent ‘extremism’ carried out by Russia’s FSB and the  Crimean occupation regime, law enforcement officers have carried out searches of s number of Crimean Tatar homes.  The  Mejlis, or Crimean Tatar representative body considers the searches a form of deliberate intimidation.

Radio Svoboda’s Crimean page reports that in the Nizhnegorsky district several families were searched, supposedly for weapons and ‘extremist literature’ as part of a criminal investigation launched over the blocking of the road in Armyansk on May 3.

As reported here, on May 3 this year around 5 thousand Crimean Tatars arrived at the Kherson-Arnyansk checkpoint to greet veteran Crimean Tatar leader Mustafa Dzhemiliev.  The latter had been stopped the day before from flying to the Crimea via Moscow from Kyiv.  The Russian authorities’ denials regarding the 5-year-ban first announced in late April were thus proven to be further lies.

The Mejlis responded by cancelling a spring festival and inviting Crimean Tatars to meet Dzhemiliev at the ‘border’ and accompany him into the Crimea.   Around 1 thousand carloads of people arrived, but so too did a huge number of Russian OMON or riot police and other officers.  With the risk of bloodshed great, Dzhemiliev decided to return to Kyiv.  The Mejlis called on people to protest peacefully, which many did, including through temporary blocking of roads.

This led to a number of people facing administrative charges and fines, and also some criminal investigations over what the puppet government’s prosecutor Natalya Polonskaya claimed was ‘extremist behaviour’.  The same Polonskaya has consistently labelled any dissent or independent behaviour ‘extremist’.

At around 7.40 a.m. on Sept 4 some 15 investigators and armed ‘Berkut’ officers turned up at the home of the Paralamov family in the village of Dvurechye.  Ruslan Paralamov was there, together with his wife and two small children, and his mother.  The men pushed their way in, forced him to the ground and put handcuffs on him. The investigator then read out a search warrant and allowed the handcuffs to be removed.

Paralamov says that the investigator claimed that he was involved in the protests on May 3, and that he had had some kind of batons and other items. He responds that he did not even go to the border that day.

The officers rummaged everywhere for around two hours, leafing through all books, newspapers and notebooks.  They told one book – “The life of the Prophet Muhammed” and other publications, as well as several books in Arabic and pieces of white and black material with Arabic ligature.  Paralamov was then taken to the police station for questioning.

The family has lived in the village for over 20 years and never experienced anything like this.

According to local residents searches were carried out at the same time in 8 Muslim families from the Nizhnegorsk district.  The targets included the head of the Nizhnegorsk regional Mejlis, Mustafa Salman. The latter, together with his son, was then taken to the police station for interrogation.

Spokesperson for the Mejlis, Nariman Dzhelyal told Radio Svoboda that the aim of such searches was not to find anything extremist or radical, but to intimidate people.

He says that the methods being applied are aimed at reminding Crimean Tatars of the Deportation which began on May 18, 1944.

The Mejlis, including its head, Refat Chubarov who was banished from his homeland in early July, are documenting all such searches.  From the same district, the police carried out searches, each time of one family, on Aug 21; Aug 28 and Sept 3.  While supposedly searching for drugs and weapons, on each occasion only religious literature was removed.

Repressive measures against the Crimean Tatars began almost as soon as Russian forces seized control in the Crimea in Feb 2014,  and installed a puppet government.

A large number of people have faced searches, the head of the Mejlis’ official newspaper has twice been ‘warned’ over alleged ‘extremism’ [demonstrated, for example, by using such radical terms as ‘annexation’ and ‘occupation’

There have also been searches, carried out by armed men in masks of Muslim schools with various literature removed.  It should be stressed that none of the books is likely to contain anything actually ‘extremist’.   Russia’s register of ‘prohibited books’ contains well over 2 thousand books, a large percentage of which would not be considered ‘extremist’ by any other regime.  There was no such list ever in Ukraine, and the books were freely available.