The West’s Clear Message to Russia: We’ll go on blusteringFirst reports on Pro-Kremlin TV of Russian soldiers killed in UkraineEntire Pskov paratrooper regiment killed in Ukraine?More Russian conscripts forced to fight in UkraineAttacked for asking why Russian paratroopers died fighting in UkraineThe Russian Invasion and Deaths Putin didn’t mentionRussian NGO has list of 400 killed or wounded Russian soldiersIf Russia is not at war, then who is in those freshly-dug graves?Macabre Convoy: Cargo 200 from Ukraine to RussiaInvasion by any other nameHalf-empty or half-emptied?Poland knows about Russian ‘humanitarian convoys’. It didn’t let one in.Stand up to Putin: buy Polish apples!No Sanctions Game Changer?Will the West sleep through this final wake-up call?Russian LifeNews inadvertently told the truth about downed Malaysian airlineMilitants accused of deliberately shooting at Severodonetsk residential areaSent to be shotThe EU’s Opaque Dealings with UkraineWhose anti-Semitic and Homophobic Choice?
• Topics / Politics and human rights 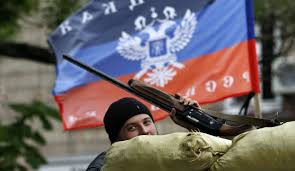 Two weeks after irrefutable proof of Russian military engagement in Ukraine, the EU has agreed sanctions only to delay them.  Meanwhile Donetsk’s Kremlin-backed militants are using the destruction and hardship they and the Russian military have initiated to present themselves as 'benefactors'

More and more people are returning to Donetsk and if the Kremlin-backed militants of the self-proclaimed Donetsk People’s Republic have their way, schools are likely to open on Tuesday, as well as many factories, etc.

The militants probably will have their way, and not only because they are heavily armed, and their numbers supplemented, by Moscow.  Pastor Sergey Kosyak writes  that although nobody expects a swift end to the war, people are coming back because the money for temporary accommodation in safe areas has run out.   Valentina, who fled the city two months ago, adds that many people remained in the city for a poignantly banal reason.  They were worried about their work record, with absences, breaks in employment having an effect on later pension. Ironically the  factories closed down in any case, but by then leaving the city had become dangerous.

Pastor Sergey is one of the people who remained to provide assistance, including help in fleeing the war zone.  He writes that there are huge queues of pensioners in the centre whom the DPR militants, in the unfamiliar role of ‘benefactors’, are providing with humanitarian aid.

“The DPR fighters consciously block Ukrainian assistance or hand it out as though from them. It’s the oldest story there is: first they create a problem, and then they resolve it. “

He adds that pensioners are beginning to genuinely go hungry after over 2 months of not receiving their pension.  He hasn’t ever heard such gratitude from people simply for being brought some food.

This is not all, of course.  In the towns like Torez and Shaktyorsk, everything closed down because of the fighting.  The only source of income, Pastor Sergey says, is to fight for the militants.

“The economy is artificially destroyed in order to provide workplaces as killers; famine is artificially created so that those who are hungry kiss the hands of their ‘benefactors’ feeding them”.

He is thankful that there are still people in those towns who are helping to provide food, medicines, etc. out of love of God and their country.  It is vital, he stresses, that people have alternative assistance, not that hypocritical aid provided by those who caused the problem.

Reaction from the West to overt Russian aggression  has largely been verbal, with the words changing or quietly shelved as Russia ignored each supposed ‘red line’.

The latest, as of Monday evening, is that a package of new sanctions against Russia has only been agreed, with their entry into force delayed “to leave time for an assessment of the implementation of the ceasefire agreement and the peace plan”.

The words about sanctions have come just over two weeks after conclusive evidence that Russian forces, using sophisticated military equipment were deployed on Ukrainian territory.  The first such proof from western sources was conveniently timed to coincide with Russia forcing its so-called ‘humanitarian convoy’ into Ukraine.  The latter provoked stern warnings and use of the term ‘invasion’ from western leaders.  These were swiftly forgotten when the convoy of white military trucks left the following day, probably taking the bodies of Russian soldiers killed in fighting. Russian forces and equipment remained and enabled the turn in the tide for Russia and its militants, with devastating defeats for the Ukrainian army.

Just over six months have passed since Ukraine and the world discovered that the 1994 Budapest Memorandum which apparently guaranteed Ukraine’s territorial integrity was a meaningless document for all other parties.  There have been countless other assurances, promises and statements of support since. Russia’s annexation of the Crimea prompted condemnation and only extremely limited sanctions, but was at least accompanied by clear threats that Russia must not even think of encroaching further into Ukrainian territory.

It did precisely that.  First with the help of heavily armed proxies and mercenaries, believed to have received training in Russia, then by bringing in Russian forces, it wrought  carnage and destruction.  Russia has now installed the officials it needs to create a frozen conflict zone and inflicted a massive burden on a country already plundered by the former regime.  It may stop here for the moment, or it could continue its offensive in order to create a much coveted corridor to the Crimea. With the EU and USA having not even managed to provide sanctions which will not be abandoned if the peace plan works, the next move  – like all the previous ones – is proving to be entirely up to the Kremlin.