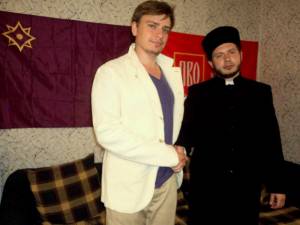 Cholkhanov, together with the leader of Young Eurasia Yury Kofner

Russian attempts to present Tanai Cholkhanov as a Crimean Tatar fighting “fascism” at the side of Kremlin-backed militants face two insurmountable hurdles:  the fascist ideology of his mentor, Alexander Dugin, and the fact that he’s not a Crimean Tatar

Interfax’s recent report that a “a well-known Crimean Tatar civic and religious figure and representative of the Tavrida Muftiat” is forming an army division on the side of the Kremlin-backed militants in Luhansk causes considerable bemusement. Supporters of Russian fascist ideologue Alexander Dugin among the militants are nothing new and Tanai Cholkhanov’s strong links with the Eurasian Youth Union make him a likely candidate. They do not make him Crimean Tatar, nor a well-known religious figure, and they only fuel suspicion about the so-called Tavrida muftiat.

There are strong grounds for believing that the formation of this muftiat in August is aimed at creating a schism among Crimean Muslims and undermining the position of the Mejlis of the Crimean Tatar People, the leaders of which - Mustafa Dzhemiliev and Refat Chubarov – have been banished from the Crimea.

The reason is clear: Crimean Tatars, and the Mejlis, which represents the vast majority of them, have been firmly against Russia’s annexation of their homeland.  In response to the repressive measures taken by the occupation regime since Russia’s invasion, the Mejlis has called on all Crimeans to boycott the elections in September.

From the outset, the occupation regime looked for friends among marginal groups such as the nationalist Milla Fyrka.  The leader of that party Vasvi Abduraimov gained notoriety at the time of Russia’s war with Georgia in 2008 by writing a letter to Russia’s leaders asking them to ‘defend the indigenous peoples of the Crimea’ from the ‘nationalists’ in Kyiv.

Music to Russian President Vladimir Putin’s ears and since April 2014 Abduraimov has been Putin’s deputy representative in the Crimea.

Tanai Cholkhanov and Abduraimov are both members not only of Milla Fyrka, but of Young Eurasia, a branch of Dugin’s Eurasian Youth Union.

Cholkhanov is, however, a Volga Tatar who only appeared in the Crimea under Russian occupation.  Before March the main mention of this supposedly “well-known Crimean Tatar figure” is from October 2013 when he and some Orthodox Christian comrades from Young Eurasia took part in an attempt to stop an LGBT rally in St Petersburg.  The claim that Cholkhanov is in fact a Russian called Yura Sapozhnikov cannot be either confirmed or refuted.  Cholkhanov certainly does seem to have materialized altogether in 2013 and have strange backing from notorious Russian Islamophobes with interesting security service connections like Roman Silantyev,

Having found few Crimean Tatars ready to accept the occupation, Russia appears to be looking for Tatars from the Volga, and what could be better than one who espouses Dugin’s semi-mystic Eurasian empire ideology, while reportedly not averse to helping the police harass Muslims?

According to Arsen Zhumadilov from the Crimean Institute for Strategic Studies, Cholkhanov’s insistence that all Tatars are a single nation could well become the line pushed by Moscow which is finding Crimean Tatar opposition to the annexation inconvenient.  In Cholkhanov’s view of reality, “all Islamic groups whose reading of Islam differs from an official Russian view are called extremists prone to terrorism”.  This, Zhumadilov points out, even includes the Spiritual Directorate of Crimean Muslims closely related with the Mejlis. “The value of a Muslim is appreciated not in terms of his religious rigor, but rather in terms of his loyalty to Kremlin. This also includes active involvement in Ukraine-Russia war in Donbass on the side of Russia sponsored forces”.

Cholkhanov’s activities in the Crimea following Russia’s invasion can fairly easily be gauged from a report entitled “The Mejlis is an “absolutely anti-Russian, and, most important, anti-Tatar structure”.  Cholkhanov, we learn, arrived a month before the March 16 ‘referendum’ and “saw with his own eyes how the modern history of Eurasia was created”.  He didn’t just see, from the sounds of it, but also took part in fights etc. given that “provocateurs were spreading enmity between Tatars and Russians”.

Now, we are told, war has come to Donbas and the “leaders of the junta and national traitors whom you couldn’t bring yourself to call children of the Tatar people are shouting out loud that the Crimean Tatars see the insurgents of the south-east and Russia as a whole as the enemy”.

There have been numerous reports about repressive measures against Crimean Tatars under the occupation.  There is also a Crimean Tatar volunteer battalion fighting alongside the Ukrainian army in Donbas.

And here, yet again, Cholkhanov rides to the rescue, leading an ‘international volunteer group”, or, as he told Interfax “an army unit” in Donbas.  This army unit, he claims, will be within the division led by leader of the self-proclaimed Luhansk people’s republic Alexei Mostovoy.  It will provide military correspondents to ensure that “the truth” is told, as the “Anna-News” agency does in Donetsk.  The latter’s relation to truth is a matter of opinion, though nothing Cholkhanov says is placed in any question by the Interfax Religion correspondent.

Quite the contrary. We learn that the “famous Islam scholar Roman Silentyev” (see above) expressed the “wish that there were more such imams and Crimean Tatars in general.

“Tanai Cholkhanov is doing more for inter-ethnic people than 50 conferences on this subject. Now we Russians can give arguments to show that far from all Crimean Tatars support fascism”.

The majority of Crimean Tatars certainly don’t.  This is far less evidently the case with Cholkhanov, many of the leaders of the Kremlin-backed militants and other supporters of Dugin’s deranged and neo-fascist Eurasian imperialism.