Crimeans threatened with prosecution for voting in Ukrainian elections 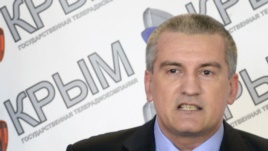 Sergei Aksenov, head of the puppet government ‘elected’ hours after Russian forces invaded the Crimea, has threatened to impose criminal liability on Ukrainians who go from the Crimea to the Kherson oblast to vote in Ukraine’s October parliamentary elections.  This was his ‘response’ to the announcement by Ukraine’s Prosecutor General’s Office that criminal liability would be imposed on the organizers of the September elections in the Crimea.

The Crimean elections are supposed to change the deputy corps in parliament by 75%, with 90% of the leaders of the executive changing.  The two leaders installed at gunpoint on Feb 27, however – Aksenov and Vladimir Konstantinov – will remain in power.

As reported, politicians in the Crimea with a good chance of winning have been prevented by the courts from running in the elections which are believed by many analysts to be aimed at ‘bringing in’ a majority from the Russian ruling United Russia party.

The Mejlis of the Crimean Tatar People have called on all Crimeans concerned about the repressive measures which Crimean Tatars are facing to boycott the Sept 14 elections.