President vetoes flawed displaced persons lawFurther calls for veto of internally displaced persons lawMysterious money supposedly allocated for refugeesKHPG statement on the adoption of a law on internally displaced personsLaw on Internally Displaced people comes in for criticismHelp for Forcibly Displaced PeopleNo mechanisms in place for dealing with refugees from the CrimeaCrimean Tatars and others face citizenship dilemmaRussian methods: Calls for Crimea’s return to Ukraine could get you imprisonedMGIMO historian fired for article comparing Crimean annexation to Hitler’s AnschlussInformation channels at warDonetsk Front in Putin’s Dirty WarScurrilous rumours used to spread fear and distrust in Eastern oblastsAutoMaidan activist shot at near ChongarRussian troops already deployed in mainland UkraineThe Crimea is our Home: Get your troops out!Crimean "referendum" a grotesque farceCrimean Tatars call on all Crimeans to boycott "referendum"Avoiding Ukraine’s language minefieldsChief Rabbi and others dismiss Putin’s “anti-Semitic extremist” claims
• Topics / On refugees 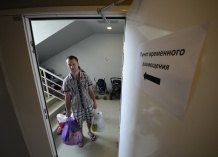 The Russian Government has issued a decree instructing the authorities in occupied Crimea, as well as 10 other regions to send refugees from Ukraine to Russian Federation republics etc. on “a programme for encouraging voluntary settlement by compatriots living abroad”.

There does not seem to be anything voluntary about it, nor will refugees be given much time for thought.  The authorities are instructed to move them from temporary accommodation within three days.

The point of the Sept 12 resolution, signed by prime minister Dmitry Medvedev, appears to be to ensure a fast-track relocation of refugees and to keep them out of the Crimea; Moscow or St Petersburg and most of the European area of the Russian Federation.   Before the heating season begins (normally mid-October) the idea is that people arriving at the temporary refugee centres will not stay longer than 3 days.

The Soviet Union had a long record of moving people with the ‘voluntary’ nature of this only on paper.  It seems Russia is following suit, with the first refugees already moved to Magadan and other places associated for many of us with the Soviet Gulag.  The far east of the Russian Federation, not named in the decree but certainly meant, has harsh weather and living conditions.

He is adamant that the people are not going there of their own free will and points out that when journalists rushed to meet the first plane load of 400 refugees in Magadan, it transpired that the Ukrainians did not know where they were, and had been told that they were being flown to the Black Sea town of Anapa.

TSN reported in early September that refugees in the Rostov oblast have refused to be sent to Siberia.   It informed that 150 people from Donbas who had originally agreed to be relocated to other regions of Russia had now refused, and decided to remain in the Rostov oblast.

As of Sept. 12 it is likely that that will no longer be possible.  With Russia clearly using the refugees to populate areas of Siberia which people don’t want to live in, the options are seriously narrowing.