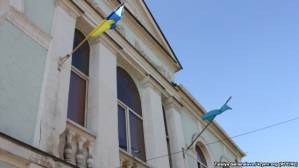 During the night after ‘elections’ organized by the occupation regime in the Crimea and boycotted by most Crimean Tatars, three men carried out a highly specific attack on the Mejlis building in Simferopol.

At 3.15 at night, three men with stockings over their heads, at least one of them with a gun, climbed onto the building and ripped the Ukrainian flag off before fleeing.

All of this was fully recording by the CCTV equipment with one of the men’s facial features clearly visible even through the stocking.  This, however, does not mean that the police are likely to try to find the culprits.

The Ukrainian flag is now in its place, together with the Crimean Tatar flag.

The puppet government established after Russian forces seized government buildings in Simferopol on Feb 27 used a variety of measures over the last month to try to persuade or intimidate Crimean Tatars, but the overwhelming majority did heed the call from the Mejlis to not take part in the elections.

The Mejlis, as well as veteran Crimean Tatar leader and former Mejlis head, Mustafa Dzhemiliev opposed Russia’s annexation from the outset.  On Dzhemiliev’s first return home, to Simferopol, after the Russian moves, he noticed that the Ukrainian flag was not flying over the building and called for it to be put back.

This led to aggressive threats from the occupation regime, an attack on three women in the building when some individuals burst in to take it down.

It also probably prompted the extraordinary ban announced on Mustafa Dzhemiliev as he was leaving the Crimea.  He was handed a scrap of paper saying that he was banned from entering the Russian Federation which, while Crimea is occupied, includes his homeland.  That was on April 22, and the initial response from the Russian authorities was to claim this was a fake and deny any ban.

The ban was, unfortunately, no fake and enforced at the beginning of May.  The current head of the Mejlis, Refat Chubarov has since been issued with an identical ban.