No Limits to Russian Impunity? 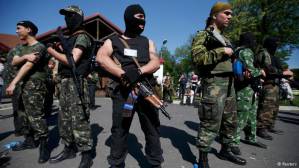 If President Poroshenko’s ‘special status’ draft bill for the parts of Donbas under Kremlin-backed militant control is passed, it will create the latest, yet hardly the last of Moscow’s frozen conflicts in Europe. With what is widely viewed as EU endorsement, it will also make a bitter mockery of rule of law in Ukraine

What Europe stands for

On Sept 12, under pressure from Russia, the EU and Ukraine agreed to postpone  implementation of the free-trade pact until the end of 2015.  That same day José Barroso,  President of the European Commission gave a speech in which he praised the Ukrainian people’s defence of “freedom, democracy and rule of law”.  These, in his words, are “the values at the core of the EU” and Europe “will always stand with countries willing to engage on this path”.

On Sept 15 the foreign ministers of Russia, Germany and France met in Paris “to discuss Ukraine”, while Barroso and Germany’s Chancellor Angela Merkel held a telephone conversation with Russian President Vladimir Putin in which they discussed gas supplies to the EU and “positively assessed” the decision to defer the free trade pact.

Meanwhile in Ukraine President Poroshenko tabled a bill in the Verkhovna Rada proposing huge concessions to the Kremlin-backed militants in Donbas.  Since the militants have already suggested that the law must give them all of the Donetsk and Luhansk oblasts and the ceasefire has been systematically breached, discussion of the bill may prove an academic exercise.   Or not, since the pressure from the EU to achieve a ‘political solution’ and refusal to assist Ukraine in fighting open invasion from Russia, has left Ukraine entirely on its own and largely defenceless.

The bill would provide the Kremlin with a frozen conflict in Ukraine destroying any chance for the latter to get out of the present crisis, while behind the scenes trilateral ‘negotiations’ including Russia  are likely to ensure that any implementation of the EU-Ukraine Association Agreement is on paper alone.   Judging by an article in Izvestia on Sept 13, Hungary, whose leaders have cooperated closely with the Kremlin, may be used to renew demands for Ukraine’s Transcarpathia oblast to become an ‘autonomous republic’

Most importantly, the Kremlin is making no effort to conceal greater ambitions, quite the contrary.  It is no accident that just this weekend Konstantin Dolgov, the Russian foreign ministry’s representative on ‘human rights, democracy and rule of law’ saw fit to assure “Russian compatriots” in the Baltic States  that the foreign ministry prioritized and was proactive in “defence of their legitimate interests”.  Perhaps an insidious form of sabre-rattling, however the three republics have increasing cause to feel unsure about that.  They have equally good grounds for wondering how many opt-out clauses NATO countries would find if a Baltic state did come under some form of attack.

The bill offers an amnesty for all but the most serious crimes, these including of course the downing of the Malaysian airliner on July 17.

Since the militants would be in control of the areas in question and would have a say regarding appointment of judges and prosecutors, any exception clauses against total impunity are surely theoretical.

President Poroshenko’s bill imposes a three-year period for this ‘special status’, however that too can be viewed with scepticism.  Once handed power on a platter, and given a carte blanche to develop ‘good-neighbourly relations’ with Russia, there is no likelihood that they would relinquish power.

Ihor Koliushko, Director of the Centre for Legal and Political Reform, calls the bill a “mockery of the law for ‘special’ territories”.

The bill, he points out, does not even stipulate which specific areas of the Donetsk and Luhansk oblasts the law would cover, while a spokesperson for the self-proclaimed Donetsk people’s republic has already said that they will accept no less than the entire oblasts.  Moreover the Ukrainian government would be obliged to finance their socio-economic development with particular amounts allocated each year in the State budget.

There is no answer as to whether the State border with Russia, some of which is now under militant control, will be reinstated.  What is to stop the ‘cross-border cooperation’ envisaged including ongoing supplies of tanks and other military technology?

Koliushko points out that the law also legalizes unlawful armed formations which would now go by the name of ‘people’s militia’ and be subordinate to the relevant heads of cities, towns or villages elected at early elections, held as early as November this year. Similar paramilitary bodies were frequenly used in the Crimea after Russian forces seized control for hostage-taking, reprisals against any dissident voices, and were almost certainly responsible for the torture and murder of lone Crimean Tatar picketer Reshat Ametov.

Political solution and its victims

One of the constant refrains from the USA and EU has been that there can be no military solution to this conflict.   It is difficult to take a political solution seriously, when Russia is allowed to maintain the pretence that it is not a direct party to the conflict. First it was a close Putin associate Viktor Medvedchuk who took part in talks, now it is DPR puppets sent to ‘negotiate’.  The choice of negotiator is not queried and the rotation of top figures among the militants has largely gone unmentioned.  Since Russians like the GPU military intelligence officer Igor Girkin [Strelkov] and Alexander Borodai have gone or been sent back to Russia, being replaced by home-grown pro-Russian militants, this is significant.  So too is the way all sides have been ignoring the recent arrival on the scene of Vladimir Antufeyev and a number of other Russian nationals who previously held top posts in the breakaway Moldovan region of Transnistria.

The ‘political solution’ which the EU has been pushing for and OSCE facilitating is with militants known to have taken a huge number of people, including many civilians, hostage.  A large number have been tortured, some murdered.  The militants’ treatment, not only of hostages, but also of the population as a whole in areas under their control has led to all areas liberated having become strongly pro-Ukrainian.  Mariupol residents, in particular, have been digging trenches and training to defend their city since Russia significantly escalated deployment of its forces and heavy military technology towards the end of August.

The bill, or any similar law, caving in to Russian demands that the so-called ‘republics’ receive special status would allow the EU to obtain gas at the expense of one more frozen conflict, and the resulting victims of lawlessness.

One more victory for the rule of the fist, with the Kremlin’s appetite whetted for further conquests.